to head out along the Roman Fossdyke Navigation.

There was the Pyewipe Inn,

When Cleddau passed here before in 1997 there were no such grand facilities. 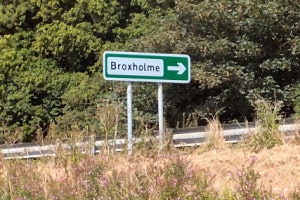 another faintly familiar name. Then it was on past an area of light industrial units just before Saxilby where comfortable moorings with enticing information boards looked rather inviting.

Yet again, though, there was a time and tide situation: the need to be at Torksey Lock for the 0700 locking down onto the Trent on Friday morning – so the boats pressed on.

Straight is the Fossdyke, Roman straight, 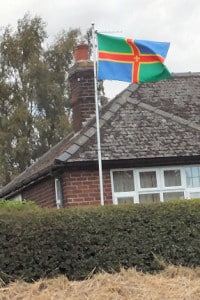 tractors working in the fields…

11 miles after leaving Lincoln a power station (Cottam) indicates that the Trent Valley is not far away.

Chouette was already moored at Torksey so the six Wash survivors (plus Boat Dog) walked the final kilometre to inspect the lock that would transfer them onto the tidal Trent.

There can be a tension on these waterways between boaters who use steel narrow boats and those who favour fibreglass (“plastic”) boats. Is it local culture, you ask yourself, that determines the decision-making of some of these boaters? Why moor yourself in a place designated as a water point for boats to fill their tanks from? Why fish from your boat in a place where fishing is prohibited? Why expect to be the sole boat in a lock – and to have the first locking of the day? Why too do such boaters feel compelled to roar up behind narrow boats and in a great show of power and noise surge past, creating a near tidal wave behind them…? 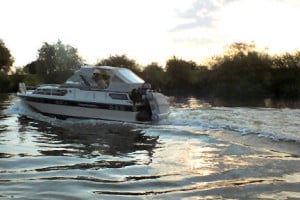 A surprise notice: along the Lincoln-Witham waterway distances were in miles but out on the tidal Trent distances and speeds are in metric form. 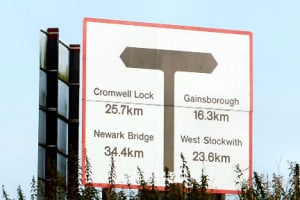 Up the wide Trent, on  a distinct loop to start with. It’s about a three hour trip, the satnav reading 6.5 mph while the tide was still running upstream. Pylons, a couple of bridges, a water ski zone, glimpses of church tops at Dunham 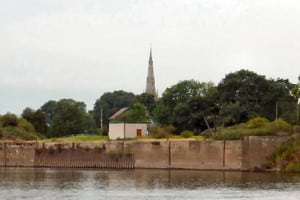 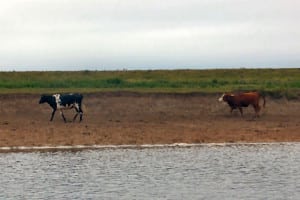 On a narrowing stretch swans made a low pass.

A fisherman waved, no – gestured. Move away, move away, flapped his arms. Another set of Why? questions formed. Why do some anglers pitch themselves behind trees and bushes from where they cannot be seen? Why do they not realise that boats need deep water rather than the shallows on the inside bank?

Not far below Cromwell is this structure, an out of use jetty for loading gravel onto barges.

Approaching Cromwell Lock there are sandy banks, a wide weir and a green light. 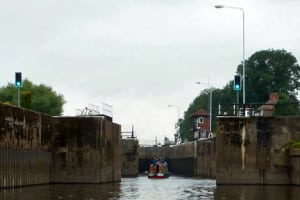 Inside there was oodles of space for Chouette, Cleddau, Tentatrice and the two cruisers which had joined the convoy.

Onward: non-tidal now, a further six miles to Newark. Under the A1,

under the East Coast main line,

On a bright sunny day mooring spaces were scarce but with patience, ingenuity and care ways can be found to climb on and off the boats! 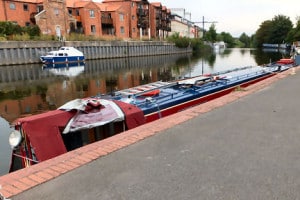 Here’s Newark: a castle slighted in the Civil War 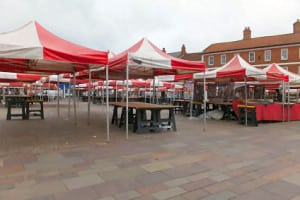 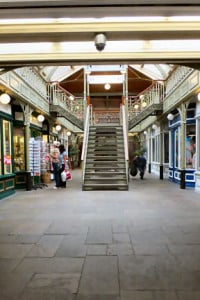 Then on Saturday down the A1 from Yorkshire came the Very Special Friend whose Very Important Birthday had been celebrated in June. Gifts were brought, home grown and home baked.

On a sunny day while cruisers and revellers cavorted on the river some serious catching up of a fair few decades was achieved.  Thank you for visiting, Friends!

Sunday: Dire weather had been forecast:  rain has pelted down, lightning and thunder have flashed and banged though the winds have yet to arrive. No boats have moved at Newark today and neither will this one…

Onwards towards Nottingham tomorrow  – or when conditions improve.

An afterthought: if wild weather is keeping you strapped to your screen and you’ve read this far gaze on this picture:

Now why was Boatwif amused to see this boat at Torksey…?