“Hello Houston, we have a problem…” What endless skill, knowledge and patience the staff at Houston must have had back in 1970 when the Apollo 13 moon flight developed a major technical fault*.
After some snag-fixing back at Stoke Boats (details later) Cleddau has been on the move again, from Longport Wharf back up the Macc to Higher Poynton. She was crewed by Techno Son-in-Law, solo until Congleton, where Cheshire Mum and Cheshire One jumped aboard.
A hundred miles south in Bedfordshire the regular Cleddau crew became a land-based Mission Control.
First inkling of how the weekend would play out came at 1115 on Friday morning… Boatwif was out and about, accompanied (remarkably) by a fully charged and switched on mobile phone.
It rang.
There was a scrabbling in a shoulder bag. The phone was grabbed and pinned to the ear.
“I’ve got it, I’m on the boat,” said Techno Son-in-Law (fresh from a train trip from Macclesfield to Stoke) “but which way do I go? Do I need to turn the boat around to go to Macclesfield?”
GULP…
It was established that the boat had been moved by the Stoke Boats team out of the “slip” and was facing a bridge ahead. That was the way to go.
Off Techno Son-in-Law set. Soon there was a text about the tunnel light (resolved by another phone conversation). Then came: “I’m at the tunnel 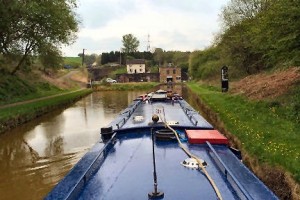 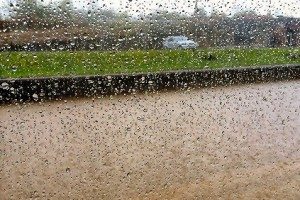 A couple of hours passed during which, apparently, the south-bound convoy arrived, the tunnel keepers had lunch and Cleddau led a north-bound convoy.
Then: “”I’m on the Macc, I’m on the Macc, I can see boats moored ahead on the left.” This was to be an afternoon of route visualisation then.
“Watch out ahead,” advised Mission Control, “you’re coming up to a sharp right hand turn at Red Bull. SOUND THE HORN.”
There was a period of text and phone silence next, for about an hour.  Then came another flurry of calls: “Exactly where do you usually moor at Ramsdell Hall? Do the cows disturb you in the night?”
Over the next few hours Mission Control advised on the location of the firelighters and matches for the solid fuel fire, where to find bedding and where to locate the porthole bungs and front window covers to block out the light…
Friday night Techno Son-in-Law slept (on and off), undisturbed by cows, but triumphant that he had navigated through the tunnel and a lock (Hall Green) single-handed.
On Saturday there was time for photos: bluebells near Scholar Green, 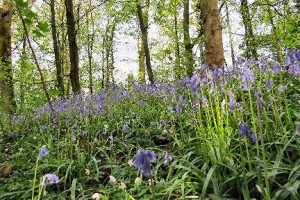 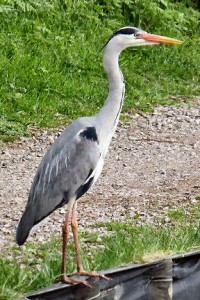 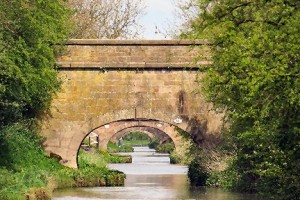 ducks on the roof top, 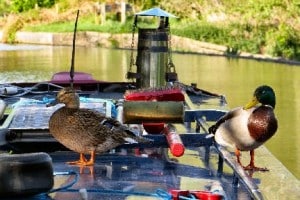 and Cleddau again climbed Bosley locks.
Mid-Saturday afternoon came another “we have a problem “call. It was Cheshire Mum. “Have you ever had trouble at the Royal Oak Swing Bridge? We can’t get the key out of the lock…”  Route-visualisation again: it was the electrified road bridge at Fool’s Nook. The far road barrier wouldn’t fully rise and the key was firmly wedged in the lock. Advice was offered but the computerised control box refused to cooperate… CART (Canal and River Trust staff) were called and after an hour, Cleddau was on her way again, the vital BW key safely back on board.
The cabin girl held the boat while the adults opened and closed Broadhurst Bridge 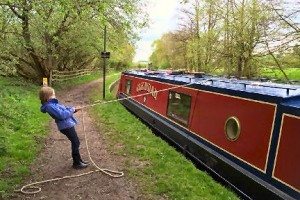 and without further calls a good mooring was found at Gurnett Aqueduct.
Sunday morning: there were just about ten miles free of locks, swing bridges and tunnels still to go. Through Macclesfield, Hurdsfield and Bollington the boat cruised, each crew member rehearsing his or her steering skills. 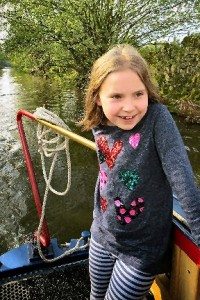 Victoria Pit Moorings at Higher Poynton were reached. Then came the mooring up.
Mission Control time again. Which pontoon? Bow or stern in?
From the marina bank the Irish named boat (A Hundred Thousand Welcomes) 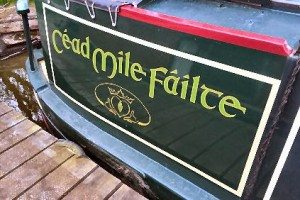 should be to the left, Halcyon Dawn 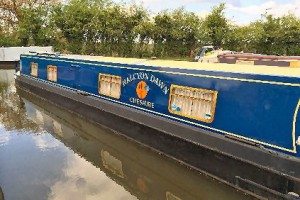 to the right.
What to do about the cratch – the composting loo – the chimney – the electric shore line?  Curtains open or closed?  Thick and fast came the queries.
The Cheshire One gave an oral report over the phone: “Would you like to know about ‘the nature’ we saw in the gardens at Bollington? There was a panda, a crocodile and a gorilla.” 149 road miles southeast Boatwif squeezed her memory cells: mm, the crocodile yes, that’s not far from Adelphi Mill, the gorilla is low in the tree near the old Canal Radio site – but a panda…? a panda..? No knowledge or memory of that, but it would be something to look out for, southbound, in just a couple of weeks time.
Mission accomplished – thanks go to the Cheshire Three crew (and Techno’s Dad for help at Bosley Locks) for sparing the Cleddau crew further stints on the darling M1 and M6 motorways. Thanks for returning Cleddau safely to her berth.

As for the snags: the bed has been lowered, the immersion heater replaced, the electrics checked, the engine serviced, the stern gland drip reduced. Next week there’ll be a crew inspection and an attempt to scrub and paint the front deck and the gas locker.
Meanwhile countdown time for the 2014 Summer Cruise is nearly here. Here’s hoping there don’t have to be (m)any calls in the next few months to Mission Control…
*http://www.phrases.org.uk/meanings/houston-we-have-a-problem.html