More musings from the River Wey

There’s a different view on a return journey – or you notice things you missed on an outbound trip. Take Triggs Lock for instance (Monday). A single-handed boater was descending ahead of Cleddau and Tentatrice. It seemed sensible to work the lock for him. Out on the platform behind the lock gates there was a moment of surprise. What? Three paddles to wind on each gate?

One paddle on each of the gates did the job, the boat dropped down and all was well. Is this lock used for water control in flood times? Meanwhile, not for the first time, a walking group plied the Captain and the Tentatrice First Mate with boaty questions.

Onward, past No Problem,

past a pretty cottage,

through the open Worsfold Gates – and a mooring soon after at Send. 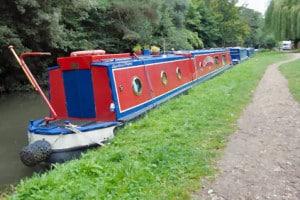 Here was almost a boat bloggers’ convention: Sheila approached: “Cledd-ow? Cledd-ow? I follow your blog.” She was from nb Smine (so called “because my grandson always said it’s smine!”) How quickly you can bond with someone never before met: horsefly bites at Devizes (hers); insect bites on the Huddersfield Narrow and the Nene (Boatwif’s); trials on the K&A; the glories of Bugsworth…

which made stately progress past the boats the next morning.

Slow watery progress allows time for slow local walks. To have just a little potter is a favourite late afternoon pursuit. There was a footbridge ahead and some tempting footpaths from it. Along beside a field or several; past stables with horses in the yard and horseboxes in the lane; on past some pretty cottages…

River on your left, thought Boatwif, there must be a way to cross it… There was then the sound of tumbling water, the weir stream at Triggs Lock.

Cross the lock. An empty landscape yawned to the right now, the low-lying Surrey hills in the middle distance.

Spotted from the towpath, though not from the boat earlier that day, was a field of goats. There were eleven pretty creatures, all with the most gorgeous markings, and all intent on their grazing.

Onward on Tuesday, quietly towards Pyrford. Here was another sight missed on the outbound cruise, Papercourt Lock, the lock that moved.

before Newark Lock and Newark Abbey.

Here is the bridge that earlier this month on a Sunday morning, 25,000 cyclists, participants in the Ride London-Surrey 100 Cycle event, had pedalled across. The cyclists kept coming into view yet not one photograph was taken – apologies. Now, with a lorry upon the bridge and a boat below it, Cleddau held back.

Red is a good colour for a canoe and for keeping a canoeist visible.

As you approach Pyrford Lock there is a long stretch of boats on permanent moorings. 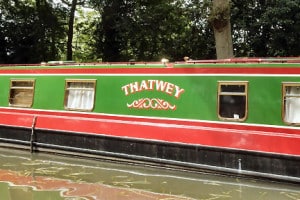 But be observant: you might just catch a glimpse of the Elizabethan summer house in the grounds of Pyrford Place.

There on a tiny plaque was the inscription: “John Donne stayed here.” He was a metaphysical poet (1572 – 1631) who secretly married Anne More and fathered 12 children. (Some may recognise the phrase No man is an island) .

and diners at The Anchor Inn

are likely to cast an eye over boats entering or leaving the lock. Here as at many Wey locks, are two features not always found elsewhere on the inland waterways: a chain attached to the end of the lock beam

to make it easier to move and yellow painted trip hazard warning pins.

it was into Pyrford Marina for an engine service and two nights’ mooring. This was to allow for a quick trip back home to deal with mountains of mail and laundry, as well as overgrown grass, hedges and weeds.

Back at Pyrford on Friday raindrops highlighted the cobwebs woven round the rooftop mint pot.

From here the navigation weaves through tree-lined stretches towards larger population centres. Not surprisingly the rowing boats weren’t in great demand in the rain at Parvis Wharf. 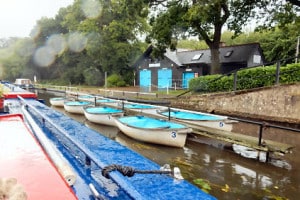 There is an ugly mess of bridges at Woodham Junction,

access point to the Basingstoke Canal,  but heading north this time some different graffiti

could be seen under the M25. On past the steam boat (registered on the Manchester Ship Canal)

to New Haw Lock where filling the empty chamber provided a close up view of burbling, churning water.

A cyclist dismounted: “Just watching a narrow boat going into a lock ,” he spoke into his phone. Helpful he was, from Colwyn Bay, working at the Brooklands Circuit nearby repainting a massive Tesco warehouse in Amazon colours. The changing economy, eh…

Still the leaky skies drizzled and dripped. But then, just before Coxes Lock

a superb mooring spot presented itself. This is a view that takes some beating:

the three buildings, all now smart apartments are beside a large mill pond.

According to information from the Addlestone Historical Society: “From 1777 the water of the mill pond was used to power an iron mill, originally built by the Wealden iron masters Raby and Rodgers, which operated on the site until 1832. It was rebuilt as corn and silk mills by 1835. The massive mill and silo buildings were erected during the first decade of the 20th century. Flour milling ceased in 1983.”

But it is this reference (from Wikipedia) that thrills: the building on the east of the former mill blocks is: “the tallest non-ecclesiastical/civic building in South-East of England outside of London pre-dating about 1880”. No wonder there seemed quite a height difference between boat and building…

There was an early (dry!) start on Saturday morning: down though Coxes Lock and Town Lock, now in the Weybridge stockbroker belt, before release from the Wey at Thames Lock.

The channel is narrow, an overhung green corridor until it emerges at the wide Five Way Junction at Shepperton. Here you’re into water- sharing: there is a lot of watery space but canoeists were practising slalom routines beside the weir, 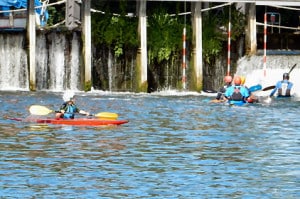 rowers from the ladies club

were manoeuvring their craft outside the boathouse while cruisers and narrow boats were transferring between the Thames and the Wey.

So the 2015 conclusion on cruising the Wey: it’s a truly delightful river to cruise; the scenery is varied and pretty, while the river structures are helpfully signed and well maintained.

Now Cleddau is back on the Thames, at Runnymede again, heading upstream for just a few days…