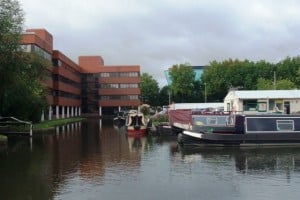 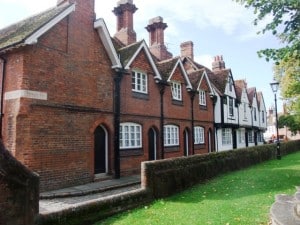 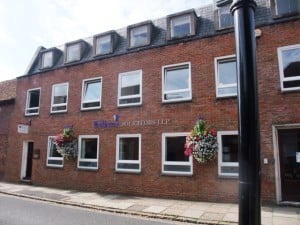 When is a nightmare not a nightmare? When real time events are happening in waking hours! Yesterday’s combination of far too much rainwater over the canal but far too little floatable water within it, plus strange hostile objects preventing the prop from turning made for exhausted sleep last night, and confused thoughts this morning. With high winds forecast and water shortages no less likely the Captain’s plan for today became: drop down into Aylesbury Basin, turn round, service the boat – and depart. So, before 10 o’clock through the final lock we went, squeezing our way through the narrow bridge hole before the final hundred or so yards.

Around the basin many boats were moored and a notice instructed visiting boats to report to the Welcome Boat. Eyes scanned the water for birdlife, but no Aylesbury ducks, or any other ducks, were to be seen. A huge ugly grey building dominated one part of the skyline (the Bucks County Council Offices), but overlooking the basin was a large imposing building, the barely year old Waterside Theatre.  Next to it developers were noisily at work, in the early phases of building waterside apartments. Boatwif struck a deal: for an hour or so looking around time the Captain was to enquire about Aylesbury Canal Society mugs… and service the boat. Sometime in the late 1990’s Cleddau had made a previous foray down into Aylesbury, when two souvenir mugs had been bought for use on the boat. However, in preparation for the Autumn 2010 boat refit, one of the mugs, along with two pasta bowls, had suffered irreparable damage. So here was a chance to replace the mug!  The Captain made the appropriate enquiry, a search of the Canal Society shelves was made – and a single mug (“Look, dust in it, it obviously hasn’t been used”) was procured.

Ashore Boatwif explored the town: the theatre (part of the Ambassador Group, no chance of a sneak look in the auditorium), the redbrick courthouse, the statues and squares, the closing or closed shops, the modern shopping precinct, the old church, venue for many community concerts and events, the Museum (Roald Dahl Gallery open by appointment), properties of entirely diffeernt styles side by side with each other but as an entity the town seems hard to define. Maybe there have been just too many building initiatives and schemes so the place lacks cohesion.

Late morning in fine but blustery weather Cleddau was pointed uphill. Through the first lock, Lock 16! There tucked in the hedge was last night’s dead duvet. On we went. Through Lock 15. From here the waters were likely to be shallow. Under instruction Boatwif trotted along the towpath, ready to release more water from the lock ahead, should it be necessary.  There lay the pile of dead carpet, poignant reminder of yesterday’s travails.  A dog-walker, escorting a pink-collared spaniel, accompanied Boatwif all the way along the shallow pound. “Empty all last winter it was, on police orders…” The Captain revved up Cleddau, happily now in two more inches of water than yesterday. Steadily she ploughed her way slowly along the muddy cut towards Lock 14. Here Mrs Pink-Collared Spaniel took a different route. On Cleddau went, through the “Indian Queen Country” (Canal Society boaters’ words) of the reed-cushioned canal, up locks 13 and 12 and so on until Lock 5. Safe now in a well-watered location Cleddau was moored for an evening rest.

The kettle was boiled, the tea was made, an Aylesbury pair of mugs sat beside each other.

But what about the Aylesbury ducks? A few cross–breeds had been spotted but no pure Aylesburys. Remember Mrs Pink-Collared Spaniel?

“Is Buckinghamshire your county?” Boatwif had asked.

(Tomorrow – weather dependent, back up onto the Grand Union, to start heading north)