Locks can be sociable places. Boaters gather around a lock chamber and, even before there’s any discussion about the weather, the “Where are you going to?” and “How far have you come?” exchanges are started.

At Penkridge (in Staffordshire)  on Wednesday morning

one upcoming boater was refilling his water tank to then potter along a bit further in what were his home waters. One descending boater had set her destination as Penkridge  “ to go to the market today,” while another had set off at 4am and was heading to Bugsworth Basin in the Peak District to go to the Gardner Engines Rally this weekend. (Wow, that’s 68 miles and 36 locks to negotiate in three days…)  There was word too about trees blown down further along the canal after the previous day’s storms.

Now that it is almost midsummer there are plenty of holiday hire boats too.  One crew (“Pass us, we’re just dawdling,”) hired for the first time in May, loved the experience so much they hired again. There was something about their newest crew member though that indicated less enthusiasm – perhaps it was the way she gripped the dogs’ leads and didn’t want to actually use her windlass… The Australian hirers were full of joy, after all the sun had come out! They were dressed in team colours, all four in black sweatpants, navy fleece tops and black baseball caps.

It’s a canal for canoe enthusiasts – three times canoe clubs have been passed.

Anglers love it too – and a memory swam back of the charming faces imprinted on the No Fishing warning signs.

The canal was here first! As you come across more modern transport features you remember that the Staffs and Worcs Canal has been here for quite a while!  Well, it was completed in 1772.  The M6 shadows the canal from near Stafford to Calf Heath; the cut passing underneath the M6 – and on the Wolverhampton outskirts there’s another bridge under a motorway (the M54). 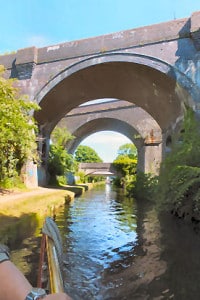 Oh yes, the narrows. For about half a mile the canal weaves under bridges through a narrow rock cutting.  It would have been a good time for walkie-talkie radios between towpath crew and helmsman to warn of any oncoming boats – if only they had remembered to deploy them…  All was well, however, on Thursday, for no other boat was approaching from the west.  Twice other narrows included serious bridge works

– and there are still more narrow sections to come as the canal drops through rocky escarpments towards the River Severn.

Then there is the frequent occurrence in these parts of circles.  Unusually the water overspill weirs from the locks are  dealt with via circular drains,

which are both pleasing to the eye and efficient.

Further circular curiosities are found at Gailey, where the Round House,

once the toll keeper’s house, was built in 1805. Not far from Gothersley Lock is the remains of another round house,

apparently occupied until the 1930s. Now it’s a picnic site, but a little bit of informative signage would perhaps be appreciated by passing walkers and boaters.

And then there’s the tower standing at the top of the three Bratch Locks .

(On closer examination it is octagonal rather than circular). It was here on Friday morning that an extra crew member reported for duty.

This was Tim, who lives nearby and who has a great deal of boating experience. It is the job of the Bratch lock keeper (on duty during the summer from 0800 to 2000) to ensure safe passage.

“Go and raise the BLUE paddles,” he instructed.

At the appropriate point the RED paddles were raised too

In bright sunshine Cleddau continued on down the canal, through Bumblehole Lock (lovely name) to the Botterham Staircase Locks – and witnessed a near emergency. A boat ascending was rising fast in the bottom lock, affected by water still pouring in from the top gates of the upper most lock. There was a torrent roaring down the side spillway and the boat cabin was rising fast towards the underside of the lock bridge – it was a stern reminder of the need to be vigilant at all times…

Onwards and downwards Cleddau cruised: there was water, lunch and a farewell to Tim at Greensforge,and after a further three locks a sunny rural mooring near Gothersley was found.

Is the interior in keeping with the exterior? Are there wine cellars below the deckboards…?!

It is Saturday morning and Cleddau will cruise onwards to Kinver.