Along the Nene (rhyming with preen and mean) from Oundle to Thrapston, 8½ miles, 4 locks

So what of Oundle then?

This extremely good-looking Northamptonshire town was previously investigated in June 2014. Then, as now, it exuded wealth and a sense of ‘county class’.

It was a mile or so short of Oundle on Thursday that this structure was passed.

It was a yurt – a yoga yurt. Inside two lithe young women were stretching and posing – they could well have been Ambridge’s Kate Aldridge with a client…*

Oundle draws upon a customer base that is not short of money. The clothes shops display expensive garments, there’s a gallery of unusual ceramics, shops selling gifts for contemporary interiors, a browser-friendly bookshop and a butcher selling a wide range of sausages. 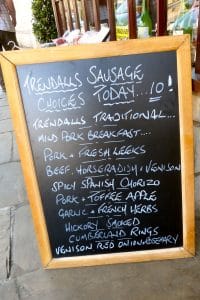 There are fewer charity shops than in many towns of this size. A wall sign on the mellow stone of a terrace house harked back to a one-time greater agricultural presence in Oundle.

At the heart of the town is the beautiful St Peter’s Church, much used by Oundle School whose premises surround the churchyard and neighbouring streets.

Though the new school year had not yet started there were sightings of staff moving between buildings and some new or would-be pupils. In term time the town must feel the school’s presence as, according to Wikipedia, Oundle has 835 boarders and 235 day pupils. It is the third largest independent boarding school in England, after Eton and Millfield. (Wikipedia)

A delve into the school’s website gave account of a recent guest speaker, Old Oundelian Sir John Timpson, of the nationwide shoe repair and key cutting business. Read here about his school days, his personal commitment to foster children and how successful the business has been in training prisoners for employment.

The parish church stands sentinel over the town and the river. It has one of those crocketed spires that shouts out to be photographed. 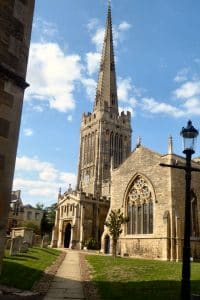 Inside the fittings and furnishings indicate a wealthy parish. 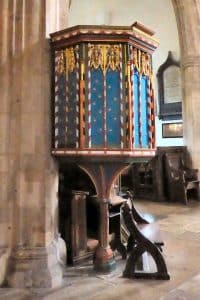 This poem caught the eye: read it twice if you have time, from top to bottom, of course, and then from bottom to top…

Oundle Marina was a good place for clearing the laundry backlog as the marina has two washing machines and two tumble driers although the warm and sunny weather meant the driers were redundant.

Oundle of course would also be a good place to restock supplies, or so it was thought. The town (about a 20-minute walk away) has a small Tesco Express, a not very large Coop – and a Waitrose. Somehow the plan devised between the Tentatrice and Cleddau crews was to walk to Waitrose and to go shares in a taxi back to the boats. A taxi from a supermarket back to the boats at Downham Market had worked a treat –  so what could go wrong…? Thorough as ever the Captain googled taxi company names in the Oundle area and typed four numbers into his phone. Within the hour Waitrose was under siege. Items on the respective shopping lists were scored off, checkout payments made and goods were loaded into the various shopping bags. Then came a shock – three of the taxi companies played recorded messages of no cars available and the fourth had a live human voice, but the same “no car available” response.  Advice was sought from the Customer Service Desk – and the very willing staff member scurried off to find a co-worker who lived in the town. Back she came minutes later, apologies on her lips. All but one staff lived out of town and no-one knew of a taxi company that ever picked up at the Oundle store. She leaned forward, eyes casting about warily, as if divulging a guilty secret, “You see, Oundle’s very affluent.”

There was nothing else for it but to walk the 1.17 miles back up through the town, along the streets, out past the Catholic Church and down Barnwell Road, laden with the Waitrose spoils… there were several stops for breath and load adjustment but another crucial lesson was learned: Never assume that a taxi service exists or is available…!

A sight not spotted previously was Oundle’s black swan – not a smoothly gliding, frothy-feathered version as seen at Slimbridge (or in Australia) but a magnificent structure in the Barnwell Country Park, just across the road from the marina.

Strategy was applied again to gain the next overnight mooring. It wouldn’t be very far upstream, just 3 locks and 4 miles, at The King’s Head at Wadenhoe. Here the Birthday Boaters (August 28th and September 2nd) had been promised a meal. But it was a Sunday – arrive early and there may be no mooring due to lunch-time patrons; arrive later and hope the day visitors will have departed…

A late morning departure time was agreed but right outside the marina entrance flaws in the plan became apparent. It’s a sharp right turn for Upper Barnwell Lock and there were four boats ahead plus two ahead of them… 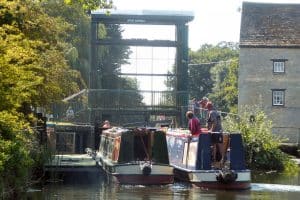 up past the beautiful mill building, along the straight used by the Oundle School Rowing Club,

catching up with the boaters ahead at Lilford Lock,

a game that continued throughout the cruise. It’s Spire Country; here is Pilton Church, its spire lit and ventilated it would seem by windows at two different heights. 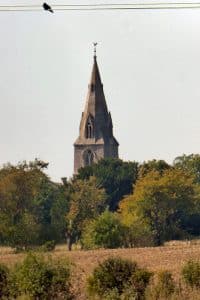 Wadenhoe hove into view, walkers on the meadow below the lock, canoes and crowds outside the pub above the lock. A cruiser bagged the last mooring space – and a long afternoon ensued during which four times,

four times, the mooring situation was improved upon. While the wild swimmers swam in their swimming hole 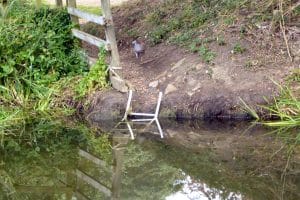 the crews played with ropes, mooring pins and mallet until finally the day boaters moved off, and Tentatrrice and Cleddau could spread their

ropes along the lovely mooring. 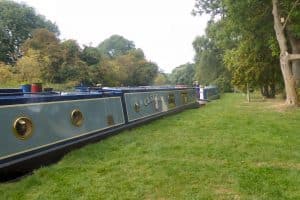 Wadenhoe village is full of charm

(see photos from 2014) and it was  a pleasure to take a stroll up the lane again.

The distinctive church with tiled roof tower is a walk up the hill from the river.

There’s a Millennium sundial outside it, and, church open on Monday morning, 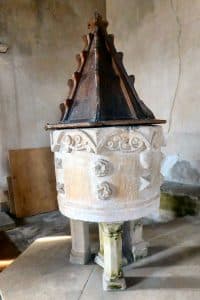 the organ was undergoing repair. The church overlooking the river makes for a picturesque setting – and unseen anywhere before – 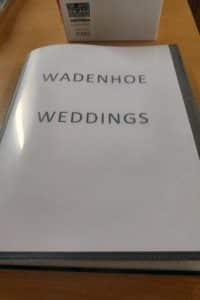 there’s an ongoing album of A4 wedding photographs kept on the welcome table, the most recent wedding being in August 2018. The church warden regaled a fascinating anecdote: the Wadenhoe churchyard and church entry point were the locations used for the famed Patrick Stewart film version of A Christmas Carol. To think that Jacob Marley’s coffin was brought into this very church…

the river winding and twisting, looping and curving.

It feels a secretive stretch, up past Titchmarsh Mill and Lock.

There were few, if any people to be seen, but there were weed streaks under the surface,

dragonflies dancing over the water and occasional herons, watching, patrolling, then darting away from intruder boats…

The Sailing Club just below Islip Lock (and close to Thrapston) offers a wonderful mooring site – a level bank, mooring poles that will withstand flood conditions,

As for Thrapston – there’s a small Tuesday market,  a well-cared for War Memorial Garden

(look closely at the shaping on the seat back)

and a galleried church. 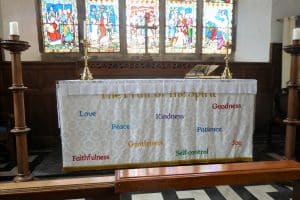 Next time, onwards, still climbing, up the Nen, heading for Wellingborough, Northampton and eventually the locks back up to the canal system.