Observations from out west 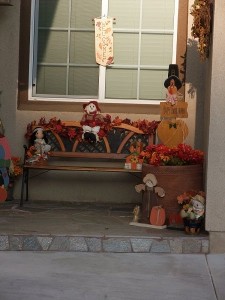 (Apologies for the disrupted appearance of the previous posting: it grieved me to see
words and punctuation so oddly placed. The email is dispatched: compatible
layout is not guaranteed…)

Friday, 19th – Saturday 20th November​
It is always great to be back in California, this now being the 9th visit since
Son and Daughter-in-law left UK shores, and the 8th to their family house in San Marcos.
On each visit certain things always surprise me, even though I should know by now to
expect them. The huge height of many of the palm trees is one, the higher from the floor and shorter cubicle doors in public restrooms another. Then there is the breathtaking
sight of the landscape hereabouts: the Captain reminded me that the reason the hillsides are such steep conical shapes is that they were never glaciated. In shops and supermarkets staff freely offer assistance " Shall I just steam this for you?" said the young girl in the Gap shop at Philadelphia, as we were buying a shirt to replace the one the Captain had so effectively splattered with blood from a sudden sneeze at 50,000 feet. Then in a local supermarket yesterday an assistant carefully unscrewed bottle after bottle of shower gel
so that I could select a preferred fragrance!

But some differences have been noted too. It is late Autumn, though not so apparent as in Britain. There seem to be flowers growing in public places and the hillsides and backyards have none of the parched looks that you see in high summer. In my stroller-pushing patrols around the neighbourhood I have come across a couple of patches of leaf litter – but not much. Generally the trees and shrubs are holding on to their greenery, and some of the bushes are additionally adorned by rich cerise berries or purple plum-sized fruit. A number of properties still show traces of Halloween decorations: pumpkins, of course, but also tall corn dollies, Autumn banners and door wreaths.

Today, as forecast, it rained frequently, sometimes pretty heavily; never before here have I seen folk in warm jackets and waterproof coats, open umbrellas in use and roads swilling with rainwater. At 9am the hills that surround San Marcos were totally obscured by low grey cloud. But, as we are reminded, it is the rainy season.

Another season prominent in people's minds is Thanksgiving. Schools are closed, " A nine day weekend, Granny," pronounced Cal Guy Senior (aged 7), while Cal Girl ("I am four and three quarters now") has informed me that Thanksgiving is from the Indians and the Pilgrims. Supermarkets are geared up for the Holidays (festive foods and what we would regard as Christmas merchandise), the Los Angeles Times yesterday was adorned by a huge cover promoting the new Disney movie "Tangled" to be released next Wednesday 24th – and
at the children's gym classes next week (though closed Thursday and Friday) Pajamas will
be the appropriate form of dress!  ​

Just about seven years ago I had a first experience of being a stroller-pushing Granny:
I shall never forget it, along the diagonal planking of the pier at Oceanside that pushes out into the Pacific, a double decker Ruby's Diner at the end, a pelican swooping
overhead. A few years on Cal Babe has been treated to a newer, lighter stroller model. It may have fewer features for the discerning parent, but it is a dream to push, absolutely unlike a wayward supermarket trolley, more a responsive well-tuned coupe, its trim wheels turning and swivelling obediently – until that is the stroller pusher encounters the pedestrian gates at the neighbourhood's entrance. Oh woe, several times have I battled to open said gates towards me, to hold the weight open so as to swing the stroller through; the tussles have made me reflect that it is easier to to take a twenty ton sixty foot long boat into a lock than it is to propel a pushchair through a hostile heavy gate!