There was all the time in the world, wasn’t there, to get to Braunston on Saturday late afternoon, just about 3 miles and 0 locks to complete  Phase 1 of The Plan.
It was a fine dry morning and boats seemed to be on the move. Little fingers of concern began to grip the stomach – would all these boats be looking for mooring in Braunston too? Would the prime mooring spots already be taken by boaters moored up for the weekend?
“If you’re going to go to Braunston, go now,” shouted out a passing boater. “There are at least two other boats behind me.” Decision made, Cleddau was quickly unpinned  for an unceremonious departure… Forget the untidy ropes and mooring paraphernalia, just rush to join the queue… And so Cleddau became number 4 in the latest caterpillar crawl towards Braunston. 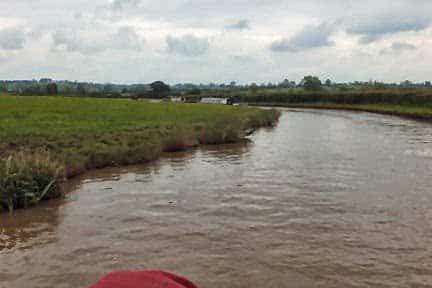 There are few roads along these last couple of miles but sheep, cows and calves a-plenty.

Then that wonderful spire hove into view

– it draws the eye upwards and as you get close enough you can make out the knobbly ornamentation on the stonework. According to a blog post four years ago the spire is “octagonal and crocketted”.

(Isn’t that a wonderful word!) Boats seemed to be moored up some distance out of the village – this didn’t bode well for The Plan. But look, there was Waiouru,  Tom keeping up the good work on his lovely boat.

Then, just before Braunston Turn there was a mooring space, right opposite the services.
“Told you it’d be slow, didn’t I!” hailed the voice of the boater who’d urged us to get a move on and get cruising only an hour earlier. There he stood on his back deck, unaware of the irony of his remark, his boat called Slowly…
Gongoozlers can enjoy great sport by standing on the bridges at Braunston Turn: here the Grand Union running from London towards Oxford and Birmingham meets the North Oxford from Coventry and the north; add in boaters wanting to service their boats, boaters wanting to shop at Midland Chandlers and also boaters attempting the fairly sharp angled turn as they change canal routes.

Throw in on a Saturday morning hire boaters and day trippers and boat congestion becomes rife.
Sometimes you get lucky – Boatwif crossed the bridges to patrol the towpath – and there, just one boat’s length in from the Turn, was a perfect space.
Hours passed. The Cleddau crew walked uphill to the village,

later strolled onwards along the towpath to the locks, sampled a drink at the Admiral Nelson,

investigated all three chandleries, fiddled about with boat jobs, fervently hoping that the now empty mooring space behind Cleddau would remain empty. Then came a text: Just passed Bridge 97.

It was the Tentatrice crew, 55 miles and 111 locks after setting off from Droitwich Spa.
(Note to readers: Cleddau had travelled 115 miles and 53 locks to this point.)
Back at the turn of the year there had been a Hogmanay soiree. “If we all go to Bedford together we’ll need to meet up somewhere – where?”
“Braunston – ‘cos that’s where the canal routes coincide.”
“We’ll need to agree a date…?”
Through the Scotch mist (it was Hogmanay) a date was plucked from the air: “OK, June 1st, make it June 1st.”
And so it was: “When shall we three meet again?” became “When shall we four, two boats and a dog meet again?”

There was a jovial dinner at The Boathouse* in Braunston on Saturday night, attended also by keen boaters Graham and Brenda of nb Jannock,
Sunday dawned clear and sunny. Shortly before 1pm the ‘To Bedford’ convoy progressed, passing The Boathouse*

along Braunston Bottom towards the locks and the tunnel. Braidbar boats Icebreaker and Sanity Again were there. People strolled in the sun, ice creams, T-shirts, shorts and welly boots much in evidence. Up through the six locks,

onwards to the tunnel.

And so, by late afternoon, Tentatrice and Cleddau were tied up just short of Norton Junction. Deckchairs had been found, Pimms had been made – and Monty had licked Boatwif’s tea mug dry…!

Total distance to Bedford:  341 miles
Distance so far: 129 miles
Total number of locks to Bedford:  143
Locks so far: 59
*The Boathouse postscript. Only Boatwif had a disturbed night’s sleep last night. What was the noise that kept her awake? Trains? Helicopters? Aircraft? Farmers working the fields overnight? Here may be the reason: (from Bruce Napier, of  nb Sanity Again)
Less happily, we’ve just had a pair of PCSOs do boat-to-boat enquiries along the towpath. Seemingly there was an armed robbery in the Boathouse pub last night and they were asking if anyone had seen anything unusual around midnight…
And we were in that pub until about 10.20 pm!
Tomorrow, down the Buckby Flight , heading south for Weedon Bec and beyond.