There’s been a dash back home, just for three days and four nights, enough time for haircuts, grass cuts and hedge cuts. There was time to check the mail, connect briefly with some friends, skim through the free newspapers – and intercept the postman just before departure…

“Someone’s birthday?” asked a towpath walker at Nantwich on Wednesday, glimpsing some cards suspended on string by the windows. 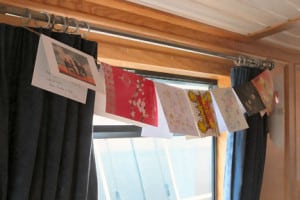 “The old lady on the front,” said the Captain from the stern, “it was yesterday, she’s three weeks older than me.” Tongue in cheek of course, but if he hopes for any birthday cards later this month … he’d better play his cards right!

Back at Overwater Marina on Tuesday, car unloaded and returned to the hire company, there was time for a birthday treat: an ice-cream and a pot of tea at the marina cafe.

Wednesday morning dawned dry and cloudy. The return cruise to Higher Poynton continued, off along the Shropshire Union, with only four miles to go before Nantwich. The route went past anglers, (one detaching a tiny perch from his line, the 32nd that morning), crawling on tick over behind a boat and butty, its steerer rigorously sticking to 2 mph and never ever looking behind…

There’s a pair of locks at Hack Green

and from here you can easily walk to The Secret Bunker.(Did it in September 2010)

Nantwich is too pleasant a town to be missed. It is a ‘Britain in Bloom’ participant

and there are many attractive black and white timber buildings.

In 1583 a major fire lasting 20 days  destroyed 150 houses, inns and other buildings. Queen Elizabeth I provided funds to rebuild the town so as to continue its role as a military staging post and as a salt producer.

The parish church is a most welcoming building. Its octagonal tower is not that easy to see

but visitors who have been inside once are unlikely to forget the stunning Queen’s Silver Jubilee West Door curtains. 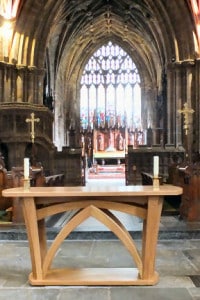 funded by a bequest, harmonises beautifully with the shape of the chancel above. It’s a lively community: there were ambitious plans, already approved, on display for a remodelling of the West Door to provide a glazed entrance porch and toilet provision and in the side chapel there was evidence of summer youth work. Here was a gazebo, a prayer tent, bedecked with playing card signs. Read them if you can. 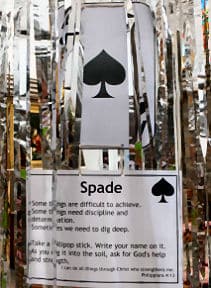 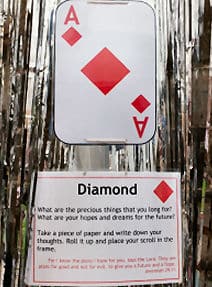 Not far away was another surprise, an American flag, once flown over the Capitol.

Another visitor to the church arrived, in search of the Parson’s Nose. A TV interview with the Rector, aired two nights previously, had detailed how a carving under one of the misericords was unique,

Back to the boat, a fair trail back along Welsh Row and up the 47 steps to the towpath.

There, playing his cards right, taking opportunity of how the boat was moored across a slight curve, the Captain had got out the bitumen paint and busily covered some recent hull scratches and scrapes.

Onwards then, leaving Nantwich and its fine towpath towing horse.

Some boat names hereabouts attracted the eye: Airship One

The canal became wider – from north of Nantwich the navigation to Chester was built for broadbeam boats. Hurleston Junction

gives access to the Llangollen Canal, which weaves and loops westward through Shropshire and into Wales. The Shropshire Union Canal continues, passing below the high embankment of Hurleston Reservoir

(which holds the River Dee water supply to Crewe and |Nantwich).

A mile further on comes Barbridge Junction. The Captain gave a one hoot horn blast to indicate a right hand turn and headed east for Middlewich. What unexpectedly lay ahead was a lock queue of four boats at Cholmondeston Lock.

And on Thursday morning, after a late start, there was a four boat queue too at Minshull Lock, then another queue at Hoolgrave Bridge,

a 15 minute pause while cementing and brick-dressing proceeded.

Cruising along the Middlewich Arm is a satisfying experience: contented cows in fields,

hay/silage ready cut in the fields, 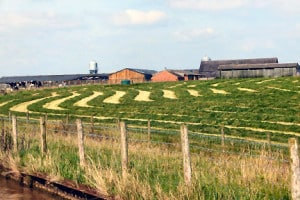 glimpses of the River Weaver and the Winsford Flashes far below. 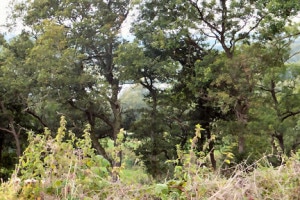 Efforts however to clamber down to the water below were foiled repeatedly by padlocked gates, severe inclines in the woods

and no clear paths…

Friday: to Middlewich. Just a matter of 4 miles, 6 locks and a quick grocery top up… perhaps in starting out at about 10am the cards hadn’t been played right today. The canal was busy early with hire boats ahead returning to bases, there were queues of varying lengths at each of the locks, at Kings Lock a gathering of share boats was taking up space and round the corner the Middlewich Narrow Boats absorbed all the mooring space, two deep on one side, right up to the next lock.

Three locks later, shopping done, Cleddau was cast off and moved towards Big Lock, the one broad lock this side of Harecastle Tunnel. An audience at Big Lock pub munched lunch and observed the frequent boating activity.

Half a mile further on came a minor triumph, a Cheshire East Recycling Centre right beside the canal. Rid at last of the box of dead batteries that have accumulated over the summer!

For the Stats’ Junkies: 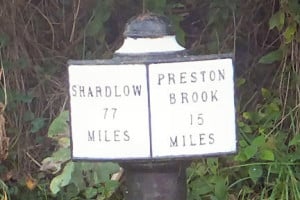