Onwards along and – up – the Trent and Mersey Canal.

The four Meaford locks to the north of Stone are close together and a joy to work.

It was a Saturday morning and the cycling tribes were all out and on their bikes. One tribe is Local Lads, always male, sometimes young teenagers, sometimes chaps who are friends. You don’t see cycling helmets being worn by them. Then there are the Families, young riders being urged to keep up with faster siblings and parents. The third tribe, very apparent at weekends, are the lycra-clad MAMILS, whizzing across bridges, weaving along canal-side lanes, passing by in a blur.

The railway runs close by the canal.

Within a mile or so is Barlaston and the much photographed Barlaston Boatyard.

Further on, with green fields on either side of the canal, is a favourite mooring place. The Wedgewood station is just across the way and trains, passenger and freight, speed past at regular intervals. This mooring place is a mere 20 minute walk or so from the Wedgewood Estate.  The last visit here was in October 2015 and then there wasn’t time to look inside the museum.  This Saturday (6th April) with several hours to spare, was different.

The highly rated collection of Wedgewood artefacts, after a period when it was feared these historic pieces would be taken overseas, has been saved for the nation. The V&A now run the museum and it is superbly laid out. Visitors can browse for free and at their own pace. A £5 ticket, however, bought a one-to-one tour of the Museum’s highlights. This focused on the narrative of Josiah Wedgewood (1730-1795) and the most important players in his life.

That a boy who left school at the age of 9 could have such an impact on the development of the pottery industry is remarkable: he transformed the manufacturing processes, constructed a purpose-built pottery and village at Etruria ,

as well as ware for more ordinary folk. He was inspired by the modern interest in classical forms and the Portland Vase he claimed was his “great work”. 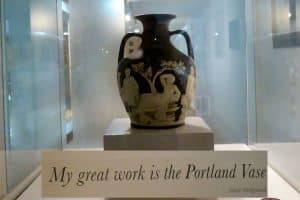 – engraved on it are the words: AM I NOT A MAN AND A BROTHER? Josiah Wedgewood – potter, industrialist, entrepreneur, abolitionist – and a major figure in the development of canal transport for shipping materials and goods. Quite a man!

The Wedgewood brand has continued and the museum traces pottery development and design right through to the current century. If interior and ceramic design is your interest then The Flagship Store is worth a wander through too…

Towpath activity on Sunday morning at Barlaston was intense – A 5km Charity Walk /Run was started and finished from the atrium of the World of Wedgewood. Here were some of the walkers

– and while queuing for Trentham Lock a PA system could be heard loudly congratulating participants.

On through Trentham, passing at least one rather crowded balcony.

Very recognisable for drivers through Stoke-on-Trent is the incinerator…

As the canal passes through the city (the city created from a federation of six towns, remember), there are reminders of its past, the North Staffordshire coalfield, 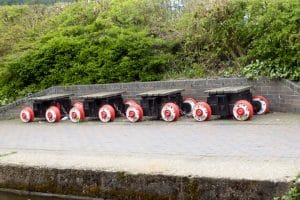 There are five locks between the bottom of the Stoke Locks

and the top… Here at the top is Etruria, the fanciful name with classical reference given to the area that Josiah Wedgewood developed…

It was in March 2017  and, a bit further on, at Longport Wharf is Stoke Boats.

Cleddau had spent a very wet winter under cover here (2013 /14). A very late lunch break at Westport Lake allowed for a quick stroll around the lake.

It’s good to see how popular a place it is; conservation work on the northern end now reveals a series of hedged paths.

It takes a mere 15 minutes from Westport to Harecastle Tunnel  – during which a wide area of land clearance was spotted.

“No rush, eat your breakfast,” the tunnel keeper announced at 0745 the next morning. “There’s a boat coming through from the north first.”

and emerged the other side about 35 minutes later.

Back to the Macc.

This moment, the turn onto the Macclesfield Canal, had been a very long time coming…

and a familiar pause (for water and to disentangle debris from the prop). 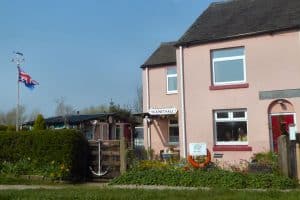 At Ramsdell Hall the land, green and fertile, drops gently away from the railings. This vista is always so pleasing.

There is evidence of course of work party action: dredged mud from the canal bottom spread on the fields, intrusive trees cut back from the offside edge (here near Congleton).

– but look, there’s scaffolding aplenty and the farmhouse is hidden underneath a barn-like structure…

For Monday night Cleddau was moored below Bosley Locks. An afternoon potter up the locks revealed more change: Lock 11 has been named Orchard Lock

and several of the ponds have been cleared of tree growth.

It was a night of high winds – and the last night before Cleddau would climb the 118 feet (36 metres) through the Bosley Locks. Then, on the 518 feet contour level of the Macclesfield Canal there would be a mere 14 miles and two swing bridges left of the Cleddau 2018 Summer Cruise…