“Plans are merely formalised wish lists” had been the conclusion drawn a few days ago. This watery venture (Macclesfield Canal to Bedford / Droitwich Spa to Bedford) had always been subject to weather, wind, water (enough/ too little/ too much), tides and healthy engines. Cleddau has had some electrical hiccups; on Friday morning it was Tentatrice’s turn for a mechanical hiccup….
During an unscheduled delay what does one do but go on a local walkabout? Northampton, it appears, now has a Cultural Quarter. 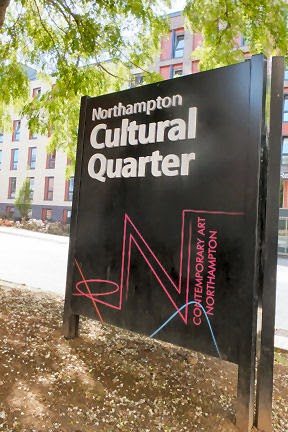 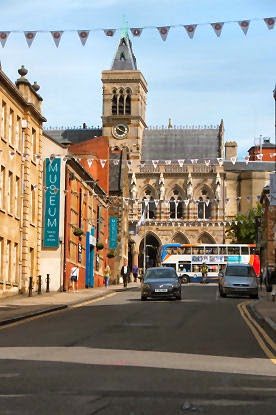 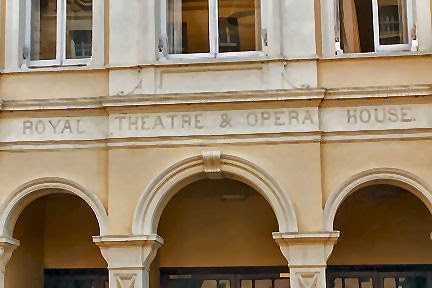 is the Royal Theatre and Opera House, the Guildhall is a fine looking building and the terrace of houses opposite Morrisons 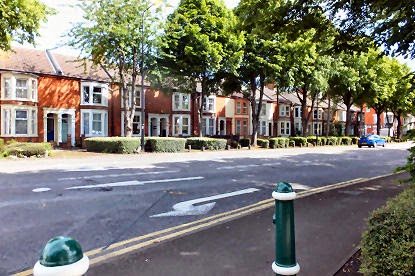 has a pleasing cohesion about it.
Once the boats were readied (ropes and anchor checked) Lock 1 of the river (Beckets Park Lock) needed to be tackled. These locks are big beasts: in times of flood or high waters many of them are designated as flood channels. The padlocks that needed to be unlocked at the start of the River Nene journey were a sobering reminder of this river’s tendency to rise quickly. The river falls 300 feet in 17 miles, and hence after heavy rains its surface level can rise rapidly. The two boats dropped down through the first lock, watched by a fair few spectators, made a futile attempt to take on water in Beckets Park and proceeded on through Northampton, canoeists sliding out of the way. 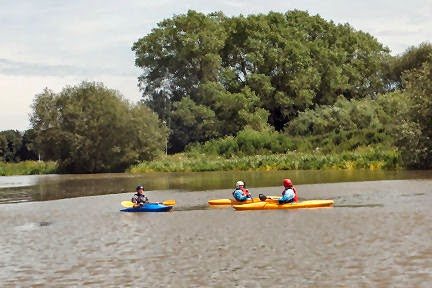 The river passes behind light industrial units and out through the town’s flood defences. 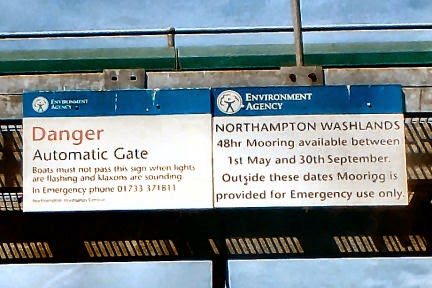 hints at serious situations.
The river broadens and the eye begins to attune to river structures: weirs, 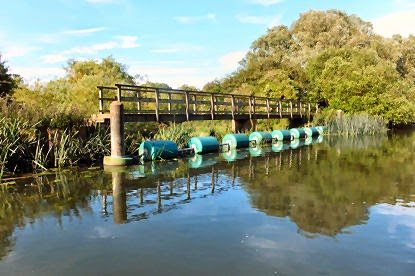 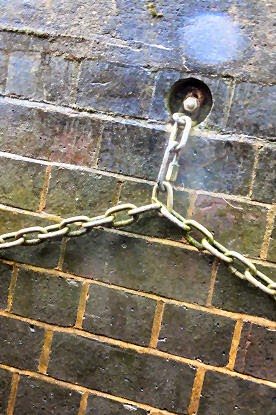 Riverside there are boat clubs, huts on stilts 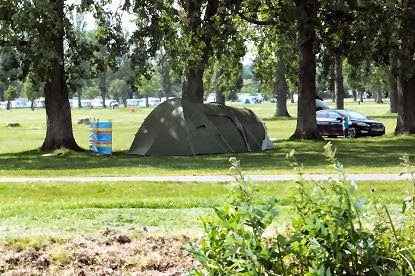 After the busyness of the Midlands canals river traffic seems particularly quiet. When a boat approaches (4 in two days) it is a surprise. The curves and loops of the river’s course can easily hide an oncoming boater – and when one is towing another (The Black Pig)

it is even more of a surprise!
The Friday cruise from Northampton to Cogenhoe involved 5½ miles and 6 locks. Permission to moor was sought at Cogenhoe Holiday Park, and, as four years ago, (and revisited on a circular walk two years ago), the boat crews moored beside the field of cows.
Tea and boat cake

was taken on Cleddau, the cake defrosted from a batch the Cheshire One assisted with in chilly February. During galley duties later the Captain let out a yelp: “There’s a bull in the field  as well, among the cows, see, he’s a big one…!”
Ducks, Canada geese and trains have been frequent alarm clocks these past few weeks – but on Saturday the alarm was the persistent mooing of cows. Cows! What time do they wake up? Dawn may have broken but the bovine chorus seemed mighty early!
Late night planning meetings for the boat crews try to juggle weather forecasts, distance, lock numbers, Monty dog walks

and mooring plans… yet on Saturday morning the supposed gap between showers swiftly became a relentless downpour. The cows watched impassively,

crews donned their most waterproof kit

– and the downhill cruise continued.
The scenery was pastoral, the locks frequent.  Five locks done and then, just before Doddington Lock, a Red Board was spotted.

Did this mean the river was closed to navigation? The lock gates weren’t locked open for flood release, the Environment Agency answer phone message stated that the Strong Stream Alert of 6th June had been lifted – and so the cruise continued. There was no sign of the moorings shown on the EA map though… So, on again in glorious scenery, graceful terns soaring and swooping above the river and meadows.
Wellingborough hove into view: a huge solar panel farm,

a prison, a flour mill.

You can moor here if you have the stomach for road traffic and mill noise – and are prepared to risk Saturday night antics in the park… Crews refreshed, boats re-watered, it was onward to the known good mooring stretch at Irthlingborough, just three more locks, three more miles further downstream, to tie up

by the one-time Rushden and Diamonds football stadium.

It is Sunday morning, the football ground is the venue for a massive car boot sale – and The Three Musketeers are due to drop by for coffee very shortly…