Oundle to Fotheringhay is a mere 4 road miles but about 7 miles by river.
It was a slow departure from Oundle (on Tuesday) with time for one last wander past the town sign (note the long ago date of its market charter)

and up into the pretty stone-built town.  Oundle sports a Waitrose and a Co-op on the outskirts, a Tesco Express by the market place, two charity shops (Age Concern and Oxfam, as in 2010) and just one empty shop. Oundle, it feels, has been unaffected by the economic downturn and folk here have prosperous lives.
There was no great speed in moving away from Oundle Marina. There were dues to be paid (£35 for a week’s mooring for the two boats: “Well, you were breasted up only taking up one mooring space,” was the reasoned and unexpected explanation from the lady in the office). There were water tanks to fill – and the narrow gap at the marina entrance to squeeze through back onto the River Nene.
An hour or more, three miles and two locks later Oundle was still in full view, for the town has developed within a great loop of the river. There was the busy A605

which bypasses the town and then came the arched North Bridge.

Out then past Cotterstock Lock and church,

seeing only one other boat moving. A lone heron posed,

statuesque, as it watched for its prey. Canada geese swam in their tribes and a kite wheeled overhead.
At Perio Lock there was a hitch – rather, several. Comfortably moored in the centre of the lock landing was a small cruiser and tender with no sign of life on board.

The Captain crept stealthily forward to the end edge, his dual aims being to land Boatwif and to avoid colliding with the boat.
No joy at landing the crew – but a collision was avoided.
A second attempt at landing crew was made on the higher, awkwardly angled, short lock side on the left… still with no success.
A third attempt was being made. Boatwif balanced herself on the bow, ready to jump. To the right there was movement – out onto the cruiser’s deck leapt a helmsman who revved up his engine, swiftly untied and sallied round the corner into the path of the approaching Tentatrice.
Boatwif clambered up onto the lock side and set about lowering the gate. It was a tortuous procedure and the wheel couldn’t  / wouldn’t be locked down…
The Captain, unable to tie up the boat, shuffled and fidgeted Cleddau in the lock approach: Tentatrice meanwhile struggled to tie up to the now vacated bollards.
Perio Lock, the lock with such an attractive name, was taking its toll. Three crew it took to secure the guillotine gate down: two crew it took to raise it after the boats had been lowered.
Successfully negotiated at last the boats moved on, a bare mile further to Fotheringhay.
Moor on the pasture below the church? The bank slopes awkwardly, 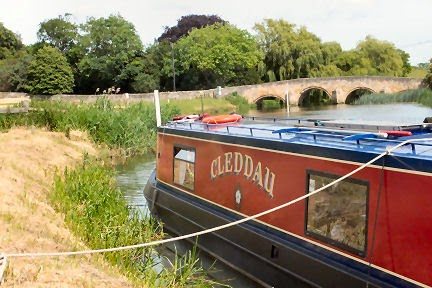 boat access would be difficult, the field was full of sheep – and there were stiles. But there was a further option…
Boatwif, Tentatrice’s Mate and the Boat Dog set off to survey the alternative. Three tough stiles,

a hike around the Castle Mound and back – and the decision was made: cruise under Fotheringhay Bridge and tie up below the Motte.

Were the crews so out of condition that 7 river miles, 6 stiles (3X2) and 4 locks should have all but exhausted them…?

Wednesday 18th June
So what makes Fotheringhay such a tourist draw whether arrival is by river or by road? The huge octagonal lantern tower of the church dominates all approaches to the village. 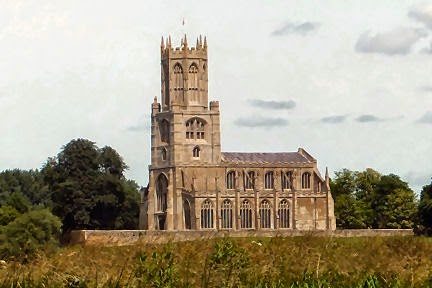 The church, sitting on high ground above the river, is an impressive example of Perpendicular Style. Details of its history as a collegiate church and its links with the Yorkist Dynasty can be found here.
Inside the church you soon notice the impressive Georgian box pews,

the panelling behind the altar (inscribed with The Lord’s Prayer, the Ten Commandments and the Creed) and the fine fan vaulting on the tower ceiling.
Then, just the other side of the bridge, is Fotheringhay Castle, a huge mound or motte, with only a very small amount of stonework remaining. (Picture shows artist’s impression of the castle before its stonework was demolished).

– as can be seen by the current use of the village telephone box…
A five mile circular walk on Wednesday along farm tracks,

through fields, over river structures

lead first  to Elton. There two photographers were engaged in a photo shoot, cameras focused on the small red kit car

(Enigma, based on a Mazda MX5 with new chassis and shell). This is another picture postcard village – and in it there was another unexpected find. Here was the name of a pretty cottage

– and then (in a Monkton Moment*) its owner declared he was, pre-retirement, Chairman of the Milford Haven Port Authority.
“So you might know *****?” (a relative, seen only a few weeks ago in March at her 60th birthday party) suggested Boatwif.
“Indeed I do,” came the reply. But as for the cottage name, it once was the property of Pembroke College, Cambridge. (Oh, by the way, this walk route had crossed from Northants into Cambridgeshire).

The walk continued: lunch at a village pub (see those chandeliers!),

Warmington Mill, across the fields, back towards the castle mound – and to the boats.
On Wednesday night, after a bank side dinner,

the crews retreated inside but the Tentatrice Boat Dog stayed alert on the bow, watching, listening, waiting… Was he sensing rabbits – or the ghosts of Fotheringhay Castle’s royal personages…?