On the Friday before Thanksgiving Break Cal Guy Jnr’s class went on a field trip to the Museum of Making Music in Carlsbad, about a 25 minute drive west towards the coast. He’d enjoyed it – and asked to go back. The museum galleries are on the ground floor of the global headquarters of NAMM, the National Association of Music Merchants.

Instruments made and sold since 1900 are on display: phonographs, 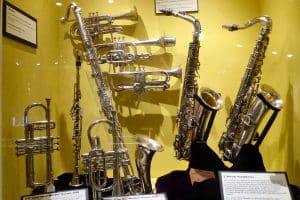 – and all sorts of unfamiliar tuned curiosities.

Hands on activity is encouraged

– and there’s a Music Trail booklet for Grades 1-5.

This being America the King had to feature! (Listen to him shaking, rattling and rolling here.)

The Museum was a good visit: you can play and listen your way round – or read the very many words explaining the development of instruments and of musical genres.

Photos here specifically for the Cheshire One

and the Cheshire Mum.

A few days previously (and also in Carlsbad) there was rattling and rolling of a different kind. “You could go to K1, if you like,” Cal Son suggested, as an activity during Thanksgiving Break. This was thought to be a Good Plan, although the prospect of a noisy smelly afternoon watching go-karts race round the track did not have immediate appeal for Boatwif…

But minds can be changed, prejudices overcome.

The go-karts are electrically powered, the vehicles are built to high safety standards, helmets and harnesses are worn, flag signals

are explained in the safety briefing… Participants’ names are shown on the electronic score board and a printout of lap times and results is available after each race. 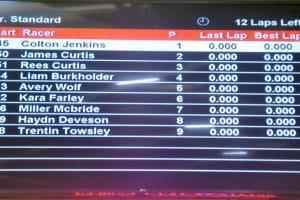 There’s a slow roll forward onto the winding track – and then a blur as the racers streak by.

Remote control operation slows and stops the cars if one has got stuck and caused an obstruction. Apart from viewing the Cal Guys’ skill levels the whole set up proved far more interesting than anticipated…

There was another go-kart opportunity a few days later, a Black Friday discount deal allowed much cheaper than usual entrance into Boomers at nearby Vista.

No helmets here, and the karts are petrol driven on an outdoor track. Even the Captain’s superior helming skills didn’t keep him safe when he and all the other boaters were soaked by the bumper boat water sprays.

Over on the mini-golf (crazy golf) course all managed to play good – and disastrous rounds.

There was shaking and rattling of a very different kind when, on Monday, the Captain and Boatwif enjoyed some time in San Diego. First stop, coffee in Balboa Park.

In the Courtyard Garden, 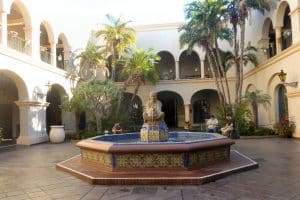 just feet from the coffee cart, a lean gardener was sweeping dust and dried vegetation from the trees.

It’s a perfect place for a spot of people watching, whether they’re cruising past on segways

or streaming towards a museum.

which makes a 25 mile round trip proved a good way to renew acquaintance with the various San Diego districts. The first leg of the route was driven by fast-talking ex-Marine Corps man, Hatch from Montana.

The trolley was hurtled at speed out through Balboa Park, past the world famous San Diego Zoo and through the very large Little Italy district.

Somewhere a poinsettia Christmas tree was being installed on a sidewalk.

Along the way facts were fired out, jokes cracked and reference made to the Top Gun  film locations – this being the hill that Tom Cruise and partner “went up back to her house by the beach”

(Up a steep incline, which leads due east inland from the Ocean!) Word on the street is that Tom Cruise has been back in town filming another movie. Watch out for that next year…

In the Historic Old Town

there was a change of trolley bus

and of driver, the second one being Philip, a San Diego man,

a history and theology major who had spent 25 years in Japan doing missionary work. The trolley continued the route: down to the water front,

past the airport (an aircraft movement every 90 seconds during each 17 hour day), past the historic ships,

the cruise ship terminal, and Midway,

Electric scooters litter the streets at many locations

(A ‘Boris bike’ initiative…?). Onwards, out past Seaport Village

(a New England style tourist district) and on into the New Town districts,

on past the Convention Center, with facts and explanations all the way…

over the spectacular Coronado Bridge to cross San Diego Bay to Coronado Island.

Though North Island is occupied by the US Naval Air Station* the entire civilian area exudes great affluence.

Beside the stunning Coronado Beach

(Scan here for accounts of celebrity visits and notable guests).The trolley rattled and shook its way back over Coronado Bridge, far views now down to the mountains of Mexico, nearer views of the naval dockyards.

More than a couple of hours after starting out the trolley was back at Balboa Park, home of the largest outdoor pipe organ in the world

and of the stunning Spanish Village Art Center.

It was a day of huge visual delight; after which the car rattled and rumbled its way back up the concrete surfaced freeways to San Marcos.