The harbour at Bristol hums with activity: there is a cross harbour ferry; 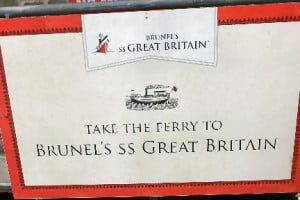 there are round the harbour sight-seeing tours, there is dinghy sailing,

there are canoeists, kayakers and paddle boarders,

An around the harbour trip (all the way to Temple Meads and back) on Wednesday afternoon cost £5 for a jump on /jump off all day ticket. It was a good way to pay the mooring dues, to dawdle with a drink beside the water, to gaze at the array of buildings surrounding the docks – and spot the bridge

that would have to be swung open to allow nb Tentatrice (which has a slightly higher air draught than Cleddau) to pass through.

Visual overload it was. Just look in this picture:

old warehousing snug between modern residential accommodation and a bright yellow ferry boat with a cartoon type dog as figurehead.

Then there was this: the ferry (named Mary Brunel, original, uh?)

which putters across the water between Oporto Quay and Brunel’s SS Great Britain.

There are the bright pastel colours of the hillside houses and the bright blue and white sails of the dinghy instruction classes.

these boats, (and there are several of them) don’t bite!

Bristol has a reputation for producing alternative ideas: here was moored a boat painted in a rather striking and definitely alternative way. .

Odd this – a boat whose windows are all formed from TV screens.

had suffered aerial bombing in the Second World War. There is much post-war redevelopment to be seen around the dock areas.

So why is this large expanse of water the Bristol Floating Harbour? By the 1760s Bristol was growing as a port but due to the great tidal range (up to 12 metres /39 feet in Bristol) ships at low tide would be stranded at odd angles on the mud. In 1809 William Jessop was employed to overcome the docking problems. By constructing two dams, two weirs, entrance locks and a feeder canal Jessop created a vast area of water with a guaranteed constant depth.

And from the era of boats leaning on the mud came the expression “Shipshape and Bristol Fashion”.  The harbour at Bristol has one of the most variable tidal flows anywhere in the world, the water level varying by more than 30 feet between tides. Ships that were moored there were beached at each low tide and consequently had to be of sturdy construction with the goods in their holds very securely stowed “Bristol fashion”.

off-loaded the Tentatrice and Cleddau crews back at Oporto Wharf, within feet of the narrow boats. Now that was great customer service!

Within half an hour a visitor had arrived at Cleddau. Straight from the office, smart city slicker Bristol Niece let herself in via the side hatch, partook of a Pimm’s,  a cup of tea and an evening meal before heading back home. It had been quite a few years since she’d last been on board. Great to see you, L.

Thursday dawned and there was Bristol to explore. Via a 90 minute bus-top trip  Boatwif and the Tentatrice First Mate toured the city.  The guide’s running commentary provided a constant stream of history and anecdote.  “Look left for the Studios where Shaun the Sheep is made… those big warehouses were the bonded Wills tobacco warehouses …

Bristol has more listed buildings than Bath, but more spread out…” It’s hard to get decent photos from a lurching bus travelling in a hilly city, so below is just a small flavour of a fascinating though bumpy morning’s travel.

The lock from river to harbour

The  docks at Avonmouth in the distance, seen from Clifton Downs

Coming down Park Row there was a neck-twisting view of Bristol University’s Wills Memorial Building, scene of university examinations and degree ceremonies.

These were elegant terraced houses seen from Queens Road. Later on the bus paused to allow appreciation of the Brunel-designed Temple Meads Railway Station.

Back near the waterside is the very modern Millennium Square, where within yards of the Planetarium

are some bronze statues. Here is William Tyndale, who made the first English translation of the New Testament

while striding along nearby is Bristol-born Archibald Leach, later known as Cary Grant.

There was another ferry trip later in the day, this time for a visit to SS Great Britain.

The story of this great ship’s life is absolutely

from her keel-laying here in the same dry dock where she is now on permanent display, through her journeys to North America and Australia. See here for the incredible story of her salvage and return to Bristol from the far distant Falkland Islands.

– and for those who travelled as immigrants to Australia.

It being Bristol the on-site exhibition was able to link three “groundbreaking designs” of their day: the steam capacity of the Great Britain, a Rolls Royce engine tested in 1968 under an Avro Vulcan and Concorde.

What a succession of magnificent achievements!

It was so, so hard to leave Bristol. Its vibrant waterfront, its many gorgeous buildings and its fascinating history deserved far more time.

Next time there is  a cruise along another (new to Cleddau) waterway, up the river from Bristol to Bath.