In a flat landscape any vertical structure is pretty prominent.

Whittlesey, a small market town, is 6 miles east of Peterborough. From the moorings beside the park (just above Ashline Lock) the tall tower and spire of St Mary’s Church is very noticeable.

Currently the church has scaffolding around the base of the spire but there was no peek inside as (on Wednesday afternoon) all doors to the church were locked.

set off for Stanground Lock, the boats being booked for a 1230 passage through to the River Nene.

After weaving round THAT corner

the view opens out – and tall chimneys can be seen. These are the chimneys belonging to the brick making industry.

There is a long history of brick making in the area and London Brick have been making bricks at the King’s Dyke site for over 140 years.Two of the seven chimneys were in smoke (kilns firing?) and drifting in the air was the faint waft of a once familiar smell, the output of a brickworks close to a past place of work. From the King’s Dyke there were glimpses of brick pits:   to the undiscriminating eye it can look rather bleak but (Techno Son-in-law take note) follow this buglife link here  for details of a vast amount of invertebrate activity.

– but not so, it was equipment in a crane depot. Behind the fencing lie stacks of over-sized meccano-type structures which are sections of crane towers.

The lock cottage at Stanground is a family home, and home too for a host of animals. Printed notices and painted signs on the stonework forbid dogs on the lower lock landing. 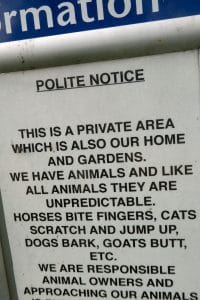 One wonders though, does the pink shaded pet sheep parked in the lockside garden bite or butt…?!

Up through Stanground Lock, 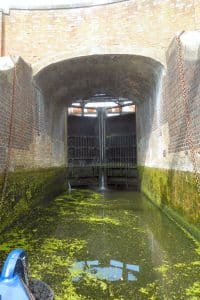 where boats and boaters bade farewell to King’s Dyke, and gave a hello to the River Nene. “See where the wall is crumbled there?” said the lock keeper. “At the top of the numbers? That’s where the floods reached in 1947…  My father told me.”

Flood memories are passed down through the generations and here was information being retold by the lock keeper, not herself alive in 1947, but  her father was the Stanground lock keeper before her…

A mile further on is the lengthy waterside at Peterborough.  A turn to the right took Cleddau further eastwards, along the straight “Mad Mile”. The willows have been given good haircuts here.

On the right (south) bank the tall chimneys and wind turbines had been joined by more tall structures, pylons carrying electrical wires from a gas fired power station.

It’s 13 miles from the lock to Wisbech 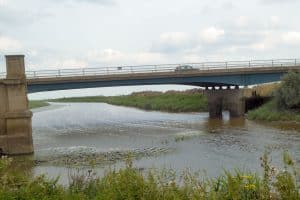 and a further 11 miles from Wisbech to where the river spills into the Wash.

The crew of the cruiser already moored on the pontoon was awaiting an 0850 locking through down to Wisbech the following morning. 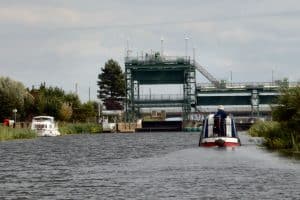 Close by is The Dog in a Doublet pub, 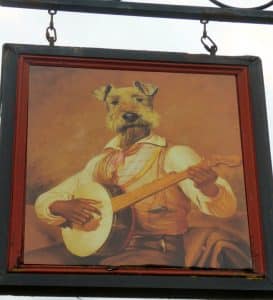 named reputedly because a landlady’s dog was affected by mange and she created a doublet for him to be carried around in.

Easier as it is to secure a boat on a floating pontoon with fit for purpose bollards it was not a particularly comfortable overnight mooring – a local road (the B1040?) runs very close by and the road noise is fairly constant.

neither of which did the Cleddau crew feel tempted to attend!

Lincoln and Ely Cathedrals both sit on prominent hilltop sites, not so Peterborough’s St Peter’s Cathedral. There was the odd glimpse from the Stanground direction but once in the city it can take some finding. There’s a stone archway from the Square through to the Cathedral Precincts which surround the building.

The impressive West Front is early Gothic in style. 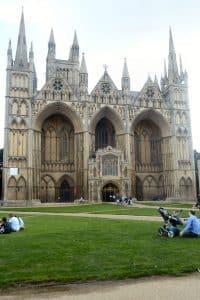 ‘It’s wider than the interior to create an illusion of size, and leans out at the top by about 18 inches.’ (Information panel). The gilded gates at the entrance to the West Doors catch the eye,

as does an enormous book, whose open pages celebrate the 900 years of the cathedral’s existence.

Due to an event in the nave (more on that in a moment) visitors were being directed to a side entrance. And on Saturday morning there were visitors aplenty. Peterborough is the sixth venue for a UK tour of the space capsule in which UK astronaut Major Tim Peake re-entered the Earth’s atmosphere in 2016.

(See here for a clip of the space capsule’s Peterborough arrival.). 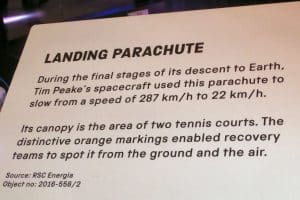 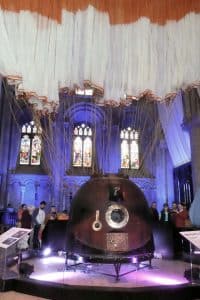 The capsule is on display in the north transept until November, curiously not very far from Katherine of Aragon’s grave…

It was an odd experience visiting a cathedral and viewing an item that had journeyed high up in space. There’s a lot of educational value in the project and it was pleasing to see so many enthusiastic visitors. But the Cathedral visit felt more incongruous because (due to the Event) there was no access to the nave. Long bars (of the drink serving kind) had been set up along both sides of the nave. Round tables and chairs were positioned where pews or chairs may normally be – and outside a lengthy queue was growing, ready for the 12 noon opening of the Schweppes-sponsored Gin and Rum Festival.

Communal imbibing is obviously popular in this city but for Boatwif there are other attractions.

You know how certain types of premises can have a magnetic draw on a person. For some it’s shoe shops, for others it’s beer tasting places; for some it’s vintage items while for others it’s bookshops. Hands up for here for bookshops – and theatres… A route along the Peterborough Embankment passes within feet of the Key Theatre. The doors were open, the Box Office staffed.

“Err, do you have anything on this week?” went the tentative enquiry.

“Yes, Guys and Dolls. Popped in yesterday. It looked pretty good. Not many evening performance seats, but 2-for-1 on the Saturday matinee…”

This was worth considering…

And so, for £7 a head each Boatwif and the Tentatrice First Mate enjoyed a riveting afternoon’s entertainment. 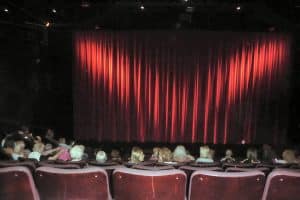 The Kindred Youth Theatre, with a cast of fifty (and a dozen live musicians) staged a fifties New York musical with verve and passion. The programme notes gave a short biography of each cast member, the youngest 13, the oldest 21, but most in the 15-18 age bracket. The production was superb – the cast members displayed great stage presence, the set changes were slick, the costumes colourful, the sound quality good and the dance routines fantastic. Those actors playing the leading roles displayed huge talent and versatility. The standing ovation at the end was most well deserved. What an off-the-boat treat!

When it was time to move from Peterborough it was done in heavy rain. Was the underlying anxiety about finding space at the next couple of moorings justified?  And why, having left Peterborough, did four folk and a dog return…?