So how did the Romans manage without Gore-Tex?

A Day Off had been declared in Middlewich, but how would the daylight hours be spent?  It was hot on arrival and Cleddau grabbed a conveniently shady mooring space beneath trees, between the play park and Big Lock.

Middlewich is a useful stop: there’s a fish and chippery above King’s Lock, a very helpful DIY store, a Tesco Express – and a bit further away a Lidl and (a few more yards further on) a Morrison’s. You can get your hair cut quite easily in Middlewich, you can listen to bell ringing practice on a Tuesday evening from the church in the centre of town, but you can’t ever find the church open on a weekday.

An evening prowl along the towpath and up past the three town locks was a reminder of how Middlewich presents itself.

Like the other Cheshire “wich” towns, Nantwich and Northwich, it is a salt town. (No doubt the Tentatrice crew will quickly intervene with a reminder that Droitwich down in Worcestershire is also a salt town). Salt was, and still is, a precious commodity in these parts. Two thousand years ago the Romans valued and used Middlewich salt.

Cleddau’s first trip to Liverpool had stalled in Middlewich three years ago due to Operation OfSTED when the Captain had been summonsed south ; it was then that information about a Roman fort site not far from Big lock was discovered…

Day Off? Well, the fort site just had to be looked at again.  A leaflet from the library had a misleading map diagram but after a diversion along the Croco river bank

the great field was found. And what a size it is.

Here (Harbutt’s Field) the fort was built (in about 70AD) to guard the crossing points of the Rivers Dane and Croco and to control the brine springs. Two information plaques give some impression of how the fort was laid out, in a typical playing card shape.

By about 130AD the fort was being dismantled although the salt extraction continued.

After Middlewich Cleddau set off towards another Roman settlement, Chester. Whereas the Romans would have footslogged it across northern Britain, the more modern eighteenth century transport options allowed Cleddau and crew to travel by water…

There was a formation take-off casting off (Thursday morning)

when Tentatrice and Cleddau left their shady moorings beside the park and headed for the trio of Middlewich locks. These locks get busy: “I had 40 boats through here on Tuesday,” said one of the volunteer lock keepers. ”Most I’ve ever had is 42…”

Up the boats rose, one by one,

in the single locks.

There’s a tight right hand bend between the top two locks – and then, a few hundred yards further on, a sharp right turn under a blind bridge

onto the (very short) Wardle Canal (all 154 feet of it) and up onto the Middlewich Arm of the Shropshire Union. (Green section on map). 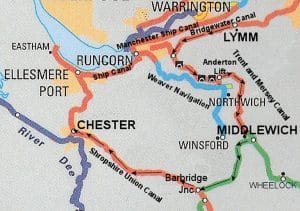 It was between Wardle Lock

and Stanthorne Lock (a distance of about a mile) that there was a “new view”.

Back in March 2018 a breach of the canal between these two locks was unexpected – and disruptive.  Cleddau, newly repainted at Aqueduct Marina four miles the other side of the breach, was stuck, unable to return to the Macc, though she did manage to fulfil her summer cruising plans via a diversion to the west down the Shropshire Canal.To look at the repaired breach site now is to be impressed at the huge amount of work involved.(videos on this site here)

This was becoming a cruise of memories:  the last time there had been boating this way, (December 2017) was in helping Jaq on nb Valerie.  Jaq had moored on a quiet stretch just after Wardle Lock and then made her way across to Nantwich. And as Cleddau cruised on this week there was sudden recall of where else nb Valerie had been visited – there was the phenomenally muddy mooring at Church Minshull, accessed via the canal bridge and then there was the mooring at Calveley, north of Barbridge Junction, a good mooring which had taken such an effort to find by car!

This 2019 Middlewich Arm cruise was a delight; there was a boat queue

the attractive Dutch gabled end of a house near Church Minshull

and then a more distant view.

Late afternoon Cleddau and Tentatrice pulled up at the Aqueduct moorings,

as pleasant a place as could be hoped for, the River Weaver far below,

– and some pork steaks sizzling on a fellow moorer’s barbecue…

Mad it seemed to move off the next day when heavy rain was drumming fiercely on the boat’s roof. It was a full, long, waterproof rain gear day…

There was a quick photo taken while passing Aqueduct Marina

and then conditions were declared 2W4C*. Drenching rain accompanied the remaining few miles and two locks on the Middlewich Arm.  There was a sharp right turn at Barbridge Junction to head north to Chester on the Shropshire Union Canal. (Wow, so much house building here…)

The locks from here on to Chester are wide locks – with the additional joy /challenge of the first two at Bunbury being staircase locks. The water from the top lock is drained into the lower lock,

and once level it is drained again down to canal level. The canal beyond is wide, leafy, quiet.

There was little boat traffic, no roads, only an occasional train. Lock after lock. The red notice at Beeston Iron Lock advises single boats only in the chamber – and as the water drops the lip in the metal lining can be seen as a potential tipping point.

How could it have rained so much? There were brief reprieves, then further downpours would lash down. Low cloud swirled around the Beeston Castle rocky crag.

Somewhere, somehow, the boats were moored after Wharton Lock

If such damp monsoon-like conditions are not totally exceptional the Romans must have marched through these parts in downpours too. How did they cope…?

Saturday: There’s a notoriously long lime of moored boats at Golden Nook outside of Chester;

progress is always slow past them, at a snail’s pace, in fact!

More torrential showers made one feel for the Roman soldiers too…

A form of civilisation appears – and some rather splendid houses.

A gloriously painted boat proclaimed that Time is Precious,

and then an overnight mooring at the Cheshire Cat

revealed this unexpected structure along the village road. What is it?

Onward on Sunday, just a few miles and eight locks (including a triple staircase) down into Chester.

Then comes the thrill as the canal weaves between tall stone city walls .

To think these walls were started by the Romans between 70 and 80 AD.

Down the last three locks the boats went,  helped by a voluntary lock keeper and a team of young gate pushers. (In the centre is a Michigan kindergartener).

Arrived – in the walled city, the walls started by Romans. For Cleddau and Tentatrice the distance (26 miles, 21 locks) had been covered in about 15 hours over four days.

But how long would it have taken fit Roman soldiers, in rain or shine, to march the 21 miles (that’s about 23 Roman miles) from Salinae (Middlewich) to Deva (Chester)?