Day 3: A gentle sort of day

Not every morning needs to start with an engine being teased into life, ready for onward motion… 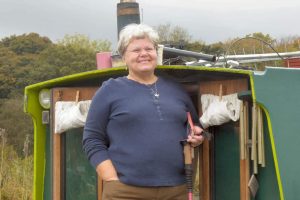 The combined efforts of three brains, three maps (her Nicholson’s, a much-thumbed Geo Cheshire Ring chart and the digital Waterway Routes) aided a bridge by bridge discussion along the Macc Canal. It’s over eight years since Cleddau relocated to this waterway – and it proved an interesting challenge to visualise and describe each stretch, each winding hole, each boater facility!

Late morning it was time to move on, after all, there is a destination to reach…

Southbound then, through Congleton, 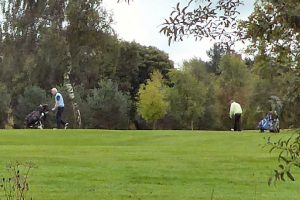 A new type of bank reinforcement was noted:

is the grey strip “fencing”, supported periodically by wooden posts, made of plastic? Is it a durable material resistant to sun and water damage? 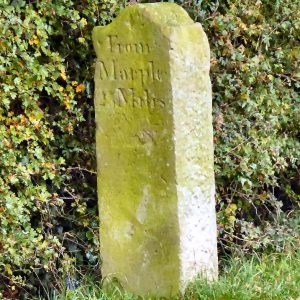 The canal creeps southwards. Just to the east is the ridgeline

on which sits the Old Man of Mow and the Mow Cop folly.

It’s a serious climb from canal to summit, achieved once by the Cleddau crew, in August 2012

It was hard to pass by a favourite mooring spot at Ramsdell Hall railings.

On Sunday it was empty of boats; wouldn’t a mooring here and a walk across the fields to Little Moreton Hall (and a National Trust lunch or a cream tea) have been fun…

The mooring magnet was resisted, and Cleddau cruised on, passing familiar boats, 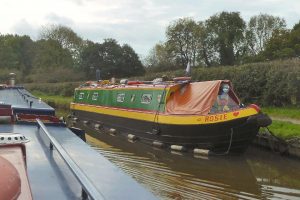 remarking on the ever colourful garden just beside Bridge 92 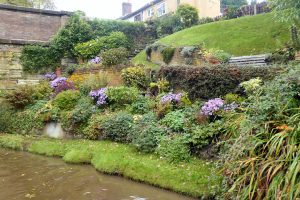 pausing for water at Hall Green. Scene of the broken wrist three years ago Boatwif treats the towpath here with unusual respect. Memories of a protracted one -handed period linger still…  Today water overspill had caused extensive muddy puddles and the Captain and Boatwif crept about on the towpath, aiming neither to slip over nor trail unwanted mud aboard…

Down then (a mere 13 inch drop) at the Hall Green Stop Lock, a further mile to the Harding’s Wood Junction and a sharp left to the Cheshire Locks at the top of Heartbreak Hill.

Usefully a boat had just emerged from the first lock (Lock 41) so there was no need to fill the chamber.

The descent began. What a contrast to Bosley’s locks: the chambers are lined with brick rather than gritstone, the gates don’t leak, at the top end of the chamber is , a single rather than a double gate

and the water takes on an orange colouration from the iron that leeches into the canal at Harecastle Tunnel.

Down three locks Cleddau went, at the second one emerging below the Poole Aqueduct.

Cleddau had cruised across this only a half hour previously. It is this structure that carries the Hall Green end of the Macclesfield Canal over the Trent and Mersey Canal.

Beyond the Red Bull Services

there is room for two or three visiting boats, 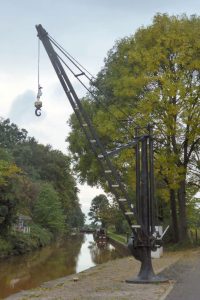 where, just past this seaside-themed garden shed,

Cleddau was moored, gently, at about 4pm… 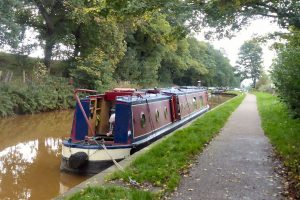