In the build up to the last-Thursday-in-November-festive-feast there are several traditional ingredients.

First, the schools have a week’s break. (Think half term nightmare for working parents). Children whose parents are at work will go to Camp (holiday supervision) unless there are other family members to care for them. Down at Balboa Park in San Diego on Tuesday both forms of childcare were apparent. When a YMCA leader was shepherding his flock away from the play park 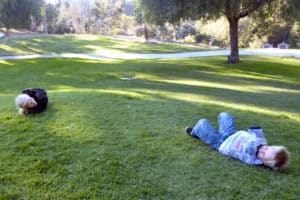 Cal Gal explained about Thanksgiving Break camps which also run during Winter Break (Christmas holidays) and over the Summer Break. “All the people in my class are going to Boys and Girls Club,” Cal Guy Jnr pitched in, as if offering further evidence. “But you guys are here to look after us…”

Earlier in the day in the Fleet Science Center Boatwif and the Captain had not been the sole grandparents. Children buzzed about, pressing, winding, watching,

exploring the principles of science in a fun way.

Cal Gal though, was soon drawn to the ever popular building blocks. This museum has been visited numerous times before and on each occasion children and adults have been engrossed in creating elaborate constructions from wooden blocks.

Cal Gal has a determined streak and motivated by a growing crowd of spectators she built and built until the very last brick was squeezed up against the ceiling.

A film show in the I-MAX movie theater

was a study of the scientific monitoring on Extreme Weather. What was most perilous:  boating up to a melting Alaskan glacier to plant sensors on the ice, fighting wildfires in Californian forests or measuring wind speeds within a tornado…?

So, keeping kids safe and amused, hopefully with some educational input, is one feature of the Thanksgiving holiday.

Additional “holiday season” entertainment is provided at cinemas. Big box office earnings are expected in the first days after release of a new movie. Cal Guy Snr planned a trip to the Regal 12 (12 screens that is) at Carlsbad, where one age group could watch The Trolls (Nudge from Cal Guy Jnr: “Granny, that was an English voice!” Two more English voices were quickly recognized too, James Corden, John Cleese and Russell Brand’s names appearing later in the credits). In another auditorium the older age group watched new release Arrival, a thoroughly engrossing sci-fi movie, according to the Captain.

For huge numbers of Americans (49 million estimated travellers this year) their Thanksgiving dinner is in a different state, or even the other side of the continent.  TV commentators advised of heavy snowfalls in the north east, of blizzard alerts in Alaska, of heavy rain further east, of airport problems and of difficulties on the roads. Much was made of the congestion southbound out of Los Angeles on Tuesday when traffic on the 405 Freeway (quipped locally as the “4 or 5 mph freeway”) was barely moving .

Thanksgiving is about eating a traditional festive meal with family and friends. It is a time to remember why there is much to be thankful about. In the hustle and bustle of Thanksgiving Eve supermarkets are particularly busy. Shoppers exit the store, boxes of necessary ingredients and foods clutched in their arms.

plus some packets of green beans. Inside the store Thanksgiving balloons graced the aisles

and fruit pies were piled high.  But consternation – no Dutch apple pie could be found in the display… Then to the rescue came another shopper who had discovered a second stash of pies right by the tills. She came to find the Cal Clan: “I think you’ll find what you were looking for right here,” she announced.

A traditional Thanksgiving roast dinner has specific ingredients: turkey of course (or roast ham). Top of the Google list of Thanksgiving menu options was this:

In the post-Presidential election mire there’s been much print expended on etiquette at the Thanksgiving table. Letters and articles recommended safe topics for conversation, appropriate body language, giving everyone a turn, active listening, courtesy… One tale appeared, however, of a mother uninviting her daughter because of opposing voting choices.

What then of Thanksgiving Day itself? TV lovers can opt to watch the Macy’s Parade, a huge carnival parade  live from New York, now in its 90th year.

Here on the west coast there are plenty of community events. A famed Turkey Trot at Oceanside has the catchy phrase “MOVE YOUR FEET BEFORE YOU EAT”, with races over different distances.

So how did the Cal Clan’s Thanksgiving dinner go? The meal (by tradition now a somewhat anglicized version) features turkey, home made stuffing and cranberry sauce, mashed potato, green bean casserole, Brussel sprouts with bacon and honey – and it was very good. There was no mention of Trump (or the many Top Trump games) – though just once the Captain veered towards dangerous territory. “BREXIT,” he was heard to say…