Cleddau had been tied up in Milton Keynes Marina for two weeks, recovering, as it were, from her summer adventures on the Severn, Avon, Wey and Thames.

Exhausted, her engine had sounded rough and more often than not it was belching smoke… This was her above Stoke Hammond Lock on September 10th. 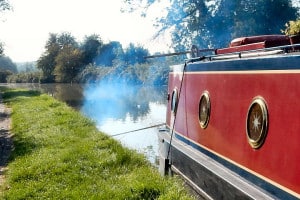 So what was the cause of this ill-health? The Beta Marine 43 engine is new, installed and commissioned in April 2014, having now run about 1100 hours. In planning for the trip from Sharpness to Portishead and Bristol the Captain had been advised by the Severn pilots to have the engine serviced and the fuel polished. “Polished” here means filtering out impurities. Moored up at Saul Junction in preparation for the cruise down the Severn Estuary Tentatrice and Cleddau both had engines serviced and fuel polished.

Mistakes can be so simple. “Got power, have you?” the fuel polisher had asked. The Captain (his mind on wind and wave heights for two days hence) ran the engine to provide a power supply. ERROR! Gunk, dead diesel bug, debris swirled around the tank – and some travelled through to the engine… The engine service including filter changes had been carried out first (another error) whereas Tentatrice was fuel cleaned first and engine serviced second. It wasn’t until about four weeks later that Cleddau’s engine began emitting black smoke, albeit spasmodically.

“You were smoking off and on coming up the Thames,” explained the Tentatrice Captain. He had followed Cleddau from Limehouse to Brentford, so it was a helpful though not welcome remark. Gradually the symptoms worsened, the smoke more on than off – and the engine sounding less than sweet.

A marine engineer who could work on the boat in the Milton Keynes Marina was sought… RCR joined the hunt… and at 0740 last Monday Marcus arrived, after a drive up from Reading.

“Let’s hear your engine,” he said. The smoke was still there, and a cylinder wasn’t firing. More fuel filtering; more tank washing. Then came the injector testing. Number 1 wasn’t firing (gunk within it?) but a new replacement has eliminated the rough running and returned the engine to its previous sweet-running self…  Meanwhile a loyal motor engineer in Bedfordshire has undertaken to have the damaged injector refurbished so that it can be carried as a spare in Cleddau’s floating chandlery…

There was one other task before departure on the Summer Autumn cruise. The chimney needed a sweep. The Captain crawled into the storage space beneath the front deck, dug around for a while, eventually emerging with a flue brush. The chimney was swept and on Friday night the fire was lit. How lovely to have warm toes before bedtime!

So at 1115 on Friday (26th September) Cleddau was shuffled out of her marina mooring and the northbound cruise up the Grand Union was resumed. For several hours the route takes you past well-groomed parkland, 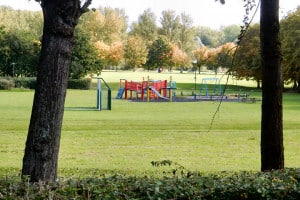 and new bridges. There were vaguely familiar boats to reminisce about: nb PIMM’S o’clock (sighted earlier this summer),

the wide beam Moose Drool (why that name?) 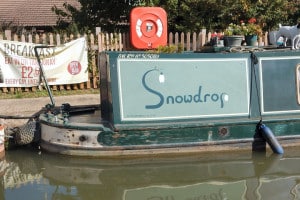 (a Reading Marine boat whose delicate paintwork when new on the Kennet and Avon fifteen or more years ago always drew admiration). There were two boat bloggers passed too: Irene and Ian were aboard Free Spirit 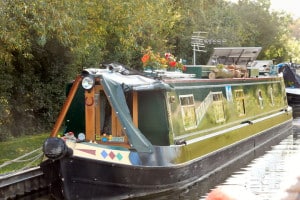 (“Great photo of the Vulcan at Duxford, Irene!”) while no-one was on board Halfie’s Jubilee.

There’s a reminder that one day, perhaps, there may be another waterway route

from Milton Keynes (under the M1 and over Brogborough Hill) to Bedford and the River Great Ouse. That would be worth exploring…

Trees along the towpath were groaning with crab apples, 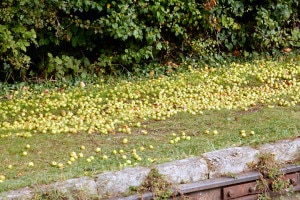 herons eyeballed their next watery treat

– and the world was smiling on a blue Autumn morning!

As you head north out of Milton Keynes transport links become a theme: there’s the modern aqueduct over a fast urban road at New Bradwell 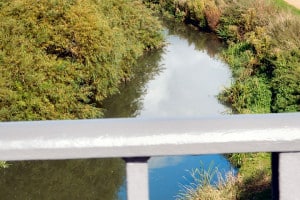 which replaced the temporary locks over the Ouse Valley. At Wolverton the lengthy mural

is a strong reminder of the area’s railway history. And just round the corner this large sculpture (2012)

is a reference to the local velodrome.

Saturday became a day of locks and conversations. A charming lady at the glorious property on the hill

talked of the Duke of Grafton and village life. Gongoozlers watched and commented at many of the seven Stoke Bruerne Locks. 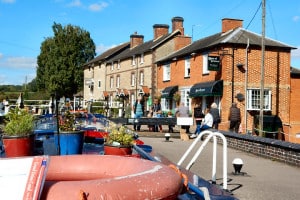 Two little girls came aboard, keen to see inside a boat. Then came Kathryn Dodington (whose blog now records activity with the Canal Museum’s

Finally more bloggers appeared, Adam and Adrian of nb Briar Rose.  Towpath conversation with them was so good it was continued on board!

Onward on Sunday, through Blisworth Tunnel

(1.75 miles in length), weaving along the contour, onwards to Bugbrooke where this exchange took place:

“Yer, Macclesfield, yer can buy my boat if yer like!” responded the owner…

This is Northamptonshire, where church towers perch on high ground above the canal at Grafton Regis, 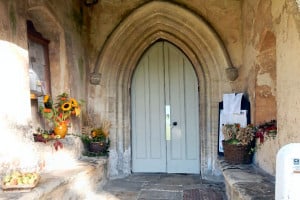 But also on high ground is this, a microwave mast

disguised as a pretend tree… Diesel was bought at Rugby Boats (previously Stowe Hill Marine) for 59.9p per litre, water tank topped up nearby – and an open mooring found in a sunny spot, the peace disturbed periodically by Virgin trains diving into Stowehill Tunnel.

Finally.  “Got a headache today then?” someone asked. Cleddau’s Welsh name had sparked the query. Yep, it was a great rugby result last night! 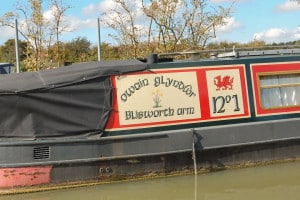 Onward to Buckby Locks and Norton Junction on Monday.