The friendliness of folk…

It’s about a 90 minute cruise between the top lock of the Glasson Branch and the county town of Lancaster.

After the remoteness of the canal arm Galgate seemed a veritable hive of activity: visitor moorings, an offside marina,

services, village facilities, a railway line, the A6…There’s an abrupt finish to the busyness and the canal resumes its rural route. In an open area farmers were seen hard at work.

There are several tree-lined sections, including the mile long Burrow Heights Cutting (otherwise known as Deep Cutting) which in some places is 30 feet deep).

The southern side of the city appears pretty affluent

and then there is a row of chimney pots – pleasing to the eye.

This was definitely the city, yet a young cow plodded about in the shallows.

Somewhere around here (subsequent research) was the old packet-boat house.

The lock-free main line of the canal had one unusual commercial use – passengers. Long thin boats with long bench seating on either side of the boat could convey passengers between Preston and Lancaster at 9 miles per hour. The boats were pulled by a pair of horses at the gallop, each pair being changed every four miles.

Then, not far beyond The Water Witch pub,  right in the heart of Lancaster and with guitarist entertainment on the opposite bank,

a mooring was found.

When in a new place Boatwif is keen to explore.

Find a Tourist Information Centre for a city map and locate the castle – simple goals.

Ten minutes into the quest and Boatwif was face flat down, making unplanned close inspection of city paving slabs… Three people were immediately on the scene, anxious on Boatwif’s behalf, swiftly followed by “I’m a First Aider, let me help.” With no broken bones to report, merely damaged pride – and, discovered later, a terminally damaged camera.

How kind was that First Aider – en route to a solicitor’s appointment she summarised the city’s layout, provided directions, gave instructions on how to locate key places on the ex-Cheshire Mum i-phone, advised on a good food place in Carnforth and on northbound bus routes. What a star! Grateful thanks to her. A cracked and uneven paving slab had been the cause of the incident – but yet its effect set the tone of this friendly place.

“I couldn’t help overhearing….” one friendly lady said the following day, before providing directions and even a description of a man who may help the camera calamity.

“And just another thing…” enthused the guide at Lancaster Castle in private conversation after a 75 minute tour. Yes, Lancaster and north Lancashire seem a very friendly, helpful place.

Lancaster is built around the River Lune which sweeps through the city and out into the vast Morecambe Bay. The castle  (first sighted from the south)

is built on a hilltop. Its walls are formidable. The main gatehouse entrance is currently closed due to conservation work in the lower courtyard.

Round the back is the Shire Hall entrance and here are the Courts.

Famous trials that took place here include that of the Pendle Witches  (August 1612) and The Birmingham Six (tried here in 1975). Photography is prohibited throughout the castle by Duchy of Lancaster regulation.  The tour takes in the impressive main courtroom and the prison which was closed as recently as 2011. This link here provides some pictures of it…

is the Lancaster Maritime Museum.  Here is the river running upstream at high tide.

The museum has displays about the area’s natural resources, boat building, the passenger packet boats

and the local fishing industry. Glasson Dock (see previous post) became the main port for North Lancashire and Westmorland. A surprise (and detailed) display though was about the Morecambe Super Swimming Stadium, opened in 1936. This is a scale model of the Stadium made of silver. 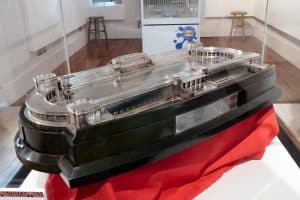 What else of Lancaster? There is more to explore of course.

There’s a good feel in the pedestrianised streets where there is a fair mix of high street names, charity shops and independent businesses.

Cleddau and Tentatrice headed further north out of the city (Friday 24th), to see Lancaster as a city built on hills, chimneys, spires and the castle creating interest on the skyline.

After a fine-looking golf course there’s a sharp left hand bend where the canal crosses first over the Bulk Road Aqueduct above the A683.

Then 60 feet above the river

This aqueduct,  another John Rennie design, was opened in 1797; it’s built from local sandstone and is a Grade 1 listed structure.

Boaters are known to have views on cyclists speeding along the towpaths. “Alright, I’ll put the kettle on for coffee after the next bridge,” Boatwif had said to the Captain, at which point what should appear through the bridge hole but a horse and rider…

Reminder to self: towpaths were for horses to tow boats along!

Out through the Lancaster suburbs, passing more garden ornamentation and pigeon lofts.

There was an obstruction at a bridge hole – and a rhythmic sound.

The canal bank was being reinforced with one rather large sledgehammer.

The coast a short walk away.

Oystercatchers feeding on the tideline.

A wrecked jetty emerging from the falling tide.

A friendly boat neighbour with expansive local knowledge. Space and weather for an alfresco drink…

From Hest Bank to the canal’s terminus at Tewitfield involves 8 more miles (and a swing bridge).

Even if the weather breaks may the friendliness prevail!