The tale of a bear and a Bible 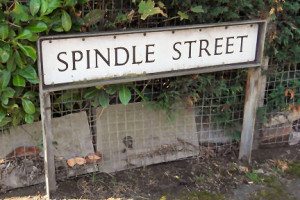 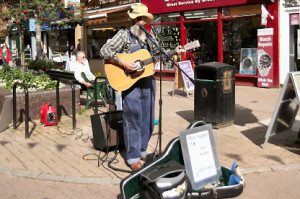 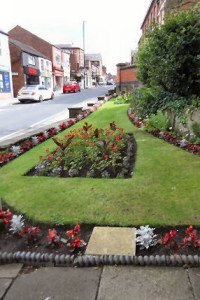 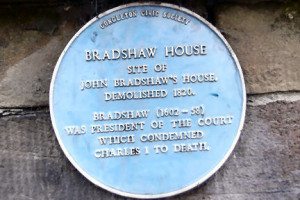 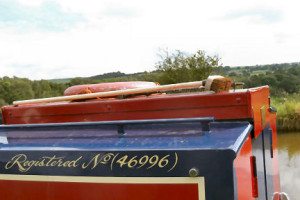 Many times in recent years the Cleddau crew have crawled or whizzed past Congleton by car – but never have they visited the town itself. From the canal the few shops and a Post Office at Hightown are easily accessible, just up the steps by the railway station, across the bridge and there they are – just a minute away. But the town centre? Where is it – apart from downhill in the valley bottom?

It was a gloriously sunny morning. “Come on,” urged the Captain, “we mustn’t waste sunshine!” Down from the aqueduct to the Biddulph Valley Way, a one-time railway line, past the railway viaduct, on further until a track led up to a bridge. A post-war housing estate; a Co-op; some factory buildings and then traffic lights. This was the first sighting of traffic lights and pedestrian signals in about three weeks – apprehension. Crossing a road in a town felt almost perilous. What a mixture of buildings – merchant housing, old timbered buildings, a very Spanish looking Casa Mia, odd little shops. There, in a fine public building, the Town Hall, was a Tourist Information Office. It’s always worth asking a question, isn’t it: “Is there a district called Beartown?” Somehow Boatwif knew that Congleton and “Beartown” were somehow linked. Well, legend has it that in the 1660s Congleton’s bear, used for bear-baiting, died just before the Wakes Holiday. This meant loss of fun and income for the locals… It seems either the Corporation sold the town Bible to pay for a new bear or loaned money saved for a replacement Bible from the town money chest. So:

Sold the Town Bible to buy a new bear.

The bear has remained associated with the town and a bear appears in many logos for town organisations. Then in 2011, as part of a major arts festival, over 70 painted bears were positioned in a trail around the town.  Two, Mayor Bear and Mercian Bear, remain in the town centre. (Now the existence of these bears explains a similar finding of lions in Northampton in 2010!).

Beartown mystery solved, more of the town deserved investigation. There is a pedestrian area, today shoppers being serenaded by a Country and Western busker. Civic pride is evident in carnival bunting and tidy streets. This was Congleton then –  and Boatwif thought of two acquaintances who have lived here, a past pupil (maybe she’s still here) and Falkland Friend’s younger sister.  After a coffee a big purchase, henceforth to be referred to as the Congleton Scrubber, was made.  The £3 scrubbing brush on a pole, it is hoped, will help remove algae from the gunnels… Steps were retraced, past a fine community garden, a beautifully tended war memorial and a blue plaque. Read it if you can and think about its significance.

It had been down to the town – and back up to the canal. It was a long slog up to the railway station to rejoin the tow path. Thirties villas lined the hill. Cars whizzed by – and a bus bearing a picture of a bear!

The slow cruise through east Cheshire continues, the canal creeping under stone bridges, passing fields of beef cattle. By mid-afternoon Cleddau was tied up at the bottom of Bosley locks. An hour or so later unexpected rain spoilt play – laundry had been drying on the open front deck and freshly applied varnish on both the side hatch lid and the Congleton Scrubber!

Tomorrow – up Bosley Locks to Gurnett Aqueduct at Sutton.