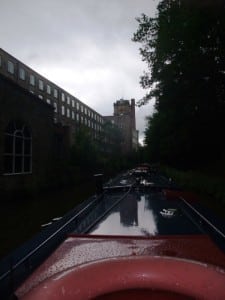 Boatwif and the Captain were home for all of five days, five days only to make the final preparations for Departure Day for the 2011 Summer Cruise.

If in panic, make a list.  The beauty of a list is that tasks completed can be ticked off, thus giving the ticker something of a sense of preparedness, or at least, of progress. The This Week list had 17 items, all but two related to the upcoming boat trip. Some of the tasks were “collections”.  All that careful measuring and negotiating was a nail-biting business. Would, for instance, the galley blinds be ready in time? Last week’s Relief Crew had had to make do with cardboard pieces in the galley and front door windows, some pieces, as it were, ventilated by air circles (as found in fruit boxes), sufficiently big to allow sunlight at dawn to stream through.  By Wednesday afternoon the blinds were ready. TICK on the list. Then there had been the problem of screening the front doors and side windows.  At the grand cost of £9 we had had foam cut to size for the side window bungs. (TICK on a previous list.) But the foam needed covering – and the door windows are too shallow for a foam solution. A search via the internet and Thompson’s directory turned up someone prepared to use our previous curtain fabric and to stiffen the door window screens with pelmeting material, task completed in eight days. TICK. Then there was the cratch (technical term for the protective canvas over the front deck, in desperate need of renewal).  A Kempston upholsterer took that job on, finishing at midnight on Wednesday. Big TICK Friday afternoon then to discover that all the above items fitted – marvellous millimetre triumphs!

Other items on the This Week list were of the TO FIND type.  Garage was searched, to no avail, for the bungee cord stock (essential for securing the cratch), found yesterday, on the boat, in a logical place. Likewise, hand-towels. Where were they? How could they not be with the bath towels? A thorough search mission was mounted at home of the airing cupboard and in the secret underbed spaces; the Captain was ordered aloft (well, up the ladder, into the loft), but no success.   Then, curiously, they appeared yesterday, on the boat, again in a fairly logical space!  Although there were numerous successes on the This Week list, perhaps Boatwif should confess to one failure. To do: make Boat Cakes. Done on Monday – TICK. Remember to take them out of the freezer to bring to the boat (reminder list posted in the kitchen)…? Err, No!

So the cruising started at 0900 on Saturday. First a slow turning around, perfectly managed, despite the wind.  Then a topping up of diesel. All was going well. Then, at Adlington, a boat swam out in front of us, and slowly, oh, so slowly, we followed it for two long hours, past Clarence Mill and then Adelphi Mill in Bollington, past the occasional snake bridge, the engine just on tickover, or so it seemed, until on the Hurdsfield side of Macclesfield its steerer pulled in by a meadow and beckoned us past. Doing 1200 revs per minute he was doing, perhaps he was slowing us up…? The Captain is doing his best now to stay ahead of Mr 1200 RPM: goodness, what if he were heading for Sharpness as well?!

Down the Bosley Twelve we came (118 feet drop) in about an hour and three quarters, a good time since most of the locks needed filling before we could use them. These locks are glorious: massive limestone blocks form the lock facings, neat bridges allow access across the tail of each lock, although the winding gear is sometimes stiff.   The views around are splendid, ever-changing: cows and sheep in fields alongside while ahead, ever-present looms the Cloud, a bulky brooding hillside.

Cleddau’s first overnight mooring is at a favourite spot, just north of Congleton, the aqueduct which ovelooks the Biddulph Valley and the railway viaduct. Below is a  wonderful walk into Dane-in-Shaw Pasture, a Site of Special Scaientific Interest. Earlier the canal banks were marked by fresh ferns, flag irises, butter burr, buttercups, cow parsley and once, a solitary foxglove. The abundance of colour and of greenery indicates regular rainfall here, unlike home territory in the parched south east. Time then for a stroll down into the pasture (to warm up after the long lock steering stint). Flowers abound: some sort of tall daisies, small plum-coloured blooms, spring fresh green reeds on a pond…

Tomorrow, however, may be far less colourful: the Harecastle Tunnel must be tackled, it’s long and dark inside, as you might expect, although the waters outside are always distinctly RED.