Passage along the tidal sections of the Trent is determined by high water times at Hull.

On Sunday afternoon (May 13th) the friendly lock keeper at Cromwell got off his sit-on mower and led the Tentatrice and Cleddau crew reps up the flight of steps to his lock control cabin.

The best time to depart from Cromwell Lock, it transpired, was four hours after Hull high tide. Tide tables were checked and 0900 on Monday morning confirmed as the departure time. “You could do it any time up to midday and get in at Torksey,” the lock keeper added, but visions of straying into shallower water and becoming stranded on a falling tide were a deterrent to a later start.

It was another blue sky day, though the northerly wind was brisk. The skipper from a cabin cruiser sharing the lock exited first

and took off at a faster speed than the narrowboats could manage.

In a glance back behind

an impressive height of water could be seen surging over the weir.

was an indicator of how far along the river Cleddau had come since Trent Bridge at Nottingham.

Along a route which is relatively featureless any structure arouses interest. An oil terminal jetty once,

but disused now, this is a debris catcher now in the aftermath of flooding water.

Human activity on the west bank caught the eye – but was it really human? A robot picker it seemed was being directed by its handler/ operator.

Usually the Captain navigates via a Nicholson Guide. But The Boating Association produces a wonderful collection of pictorial charts for the Trent.

on which the red line represents the safe channel. A pepper pot type structure on the western bank

is a mill in Carlton Trent: “Old Mill NO top” says the arrowed label on the map.

Onwards, in a stiff breeze, following the red lined course. There were cows to the right

The boat was steered left, close in to the bank, Tentatrice following behind.

This is still Trent Valley country: drive north up the M1 and the power station chimneys are unmissable. Cruising downstream it is the electricity pylons that become apparent first.

Blackened and rusty, one wonders whether they are still in use… Then comes the unmistakeable shape of the Cottam Power Station.

on the photographed route barely indicates the size of the eight enormous cooling towers and the outlet stack. There are pretty houses close by the towers

– and then on the right is the 100 metre channel leading to Torksey Lock.

The lock was ready and open: it was time to have a bow rope ready. There was no sign of vertical risers for crew to loop a steadying rope, but boat hooks were being lowered. Somewhere above someone secured the rope around a bollard and returned it down to the bow. Success and quiet relief were being felt at the uneventful transit into Torksey.

After days cruising on a wide river, after hours skimming downstream with wide open views, the first sensation was one of being in crowded parts. For half a mile or more cruisers line both sides of this, the Fossdyke Navigation. .

the view is of steep grassy banks, with white-headed cow parsley gently swaying in any breeze.

It was a hot and drowsy afternoon but as the air cooled and the sun dropped in the west it was time for an exploratory walk back to Torksey Lock.

There’s an anchor on the lock house,

capstans for opening and closing the lock gates,

and the sky was pink behind the power station on the opposite side of the Trent.

Half a mile north could be seen the stark remains of Torksey Castle.

A photo expedition was mounted the following morning: Boatwif and the Tentatrice First Mate crept as close as possible to what is a private property.

The Castle / Hall was built in 1560 and must have offered fine views across the Trent (well before cooling towers days, of course). It was slighted in 1645 during the Civil War, is in a ruinous state now and is obviously unsafe.

It was another gloriously sunny morning. Colours were clear and bright: a lush beech hedge,

warm and welcoming reds in the carpet and seat upholstery of Torksey’s St Peter’s Church.

And what a welcome: the church was open, and open for business too. In a back corner at the west end the Post Office was open, manned for two hours twice a week by a travelling counter clerk.

His places of work seem to take in several Lincolnshire churches. For customers he had strawberries, eggs and newspapers on sale too!

The café beside Torksey Lock has a reputation for splendid food. At lunch time the cakes looked delicious

and the sausage rolls (praised in print in the guide book)

It was the attitude of the staff member that was sorely trying. On another occasion the café will be given a miss.

a distance of about five miles. History was catching up, familiar names were appearing on road signs

and at a shady Saxilby mooring

a friend from some decades ago came to call…

Saxilby is a village with a history

and a village with a heart. It’s always cheering to hear children’s voices at play from a primary school playground. The village library is run entirely by volunteers and pride is taken in the state of the village moorings.

The gates to the recreation ground commemorate Saxilby’s fallen during two world wars.

From Torksey to Burton Waters Marina is a further three miles. The waterway is predictably Roman straight,

paralleled by a railway line and in places overlooked by Lincoln businesses.

The marina is a 15 acre site, huge, filled with white ‘ocean liners’ 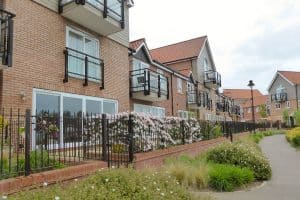 financial businesses occupy the retail spaces, apart from a gift shop, a delicatessen and a beauty salon. Very few of the boats have occupants but there is a huge number of resident greylag geese – and their goslings.

Though not a destination in itself this marina been a convenient place for the crew to jump ship and head west for a rather special celebration. 210 years of life were marked in a green corner of north Herefordshire.  “You will eat, you will drink, you will dance!”  one of the 70 year old hosts instructed. And so it was, a brilliant party, just a short stroll away from this rather lovely watery scene.

Speaking of watery scenes – what lies ahead? There’s the rest of the Fossdyke to Lincoln, (2½  miles), the Witham beyond to Boston (31½ miles, 2 locks) And then (hopefully) the Wash…

Distance and locks remaining to Bedford from Burton Waters, near Lincoln: 153 miles, 20 locks