Tight squeezes on the Llangollen

The last five miles from Trevor to Llangollen are spectacularly beautiful.

The canal runs on a contour along the side of the Vale of Llangollen, the River Dee running in parallel below along the valley bottom.

For boaters crawling towards (or from) Llangollen the trip can be a nerve-wracking business. There are three stretches of Narrows, where there is room for one boat width only.

For the second time in recent weeks the hand-held radios were deployed again, the recent Bosley Locks volunteer duty  providing useful experience in transmitting (hopefully) helpful information. There were long delays as Boatwif walked ahead and the Captain held off behind.

“Cleddau, Cleddau, stay where you are, still not reached the end of the Narrows…” (the longest stretch being 500 metres).

The canal enters Llangollen some height above the little town, then has one more squeeze point through to the Wharf. Here it passes the trip boats and bears right into the boat basin.

This is a superb mooring place (£6 overnight for a maximum of two nights). There is a water tap for each mooring pontoon, electric hook up for each boat

and easy access to rubbish bins (including one for mixed dry recycling). From the railway station near the Dee Bridge the occasional hoot of a steam train (the Llangollen Railway)   provides an unexpected but evocative sound effect!

The horse drawn trip boat takes passengers beyond the basin for a further 1¾ miles to where the canal water is drawn from the River Dee at the famous Horseshoe Falls.

The J-shaped weir of the Falls was designed by Thomas Telford and built between 1793 -1808. How glorious a scene it is… and how functional. The river provides the canal with water and 46 miles downstream supplies Hurleston Reservoir with water for the towns of Crewe and Nantwich.

Llangollen proved a very sociable destination. Tentatrice had visitors on Saturday and there was a jolly lunch with mutual friends on Sunday. Cleddau had a family visitation too on Sunday. “Just call us Injured Soldier and Matron,” said the Nephew. 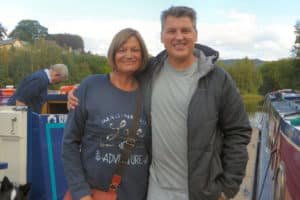 He’s been on board before but not since the 2011 and 2014 refits… A very good afternoon was spent on engine talk, bed extensions and boaty destinations…

Then on Sunday evening (post Archers) there was a glorious gathering on nb Chance,  three blogging crews, all with tales to swap and exploits to exchange…

Llangollen on a fine weekend had the feel of a Denbighshire Tenby or a Matlock Bath bank holiday: day trippers roaming the streets, a half dozen drunken women weaving across the Dee Bridge, a Harley Bikers Meet on the Eisteddfod field,

There are striking floral displays on the Dee Bridge.

leading the way out to the Eisteddfod field.

It was in 1947 that the first musical gathering was held here, a post-war international festival of song and dance. The flapping canvas marquee has been replaced by a striking all weather concert venue.

On Sunday morning the building was open. There were no stewards or staff to seek permission to explore, so what harm could there be in taking a quick look inside…? Given the thick carpet and heavy curtaining the concert hall’s acoustics must be very fine.

There are bars and conference rooms too. Outside on the field the tents, mobile homes and motorbikes marking the Harley Meet struck an unexpected note.

Then, a performance circle laid out on the grass

brought back a (very) long ago memory: pupils on a school trip, a wet Wednesday, folk dance day and colourfully dressed folk dancers from Ukraine performing with energy and verve on the Eisteddfod field.

The journey back started on Monday afternoon. The first leg was a mere two miles down the canal for a mooring with 3G availability. Tied up by 5pm boat traffic chugged past in both directions for several hours. The huge popularity of this canal during the busiest months creates pressure on mooring spaces and log jams at tight corners.

The first log jam of Tuesday was at the Trevor end of the Pontcysyllte Aqueduct. There were two boats in the queue ahead to cross the aqueduct, seven boats coming off the aqueduct,

a trip boat heading into Trevor Basin and a boater determined to turn left towards Llangollen. Where could the Captain position Cleddau..? “Haven’t you got a bow thruster?” called an irritable voice. (Such a new-fangled device, a sideways propeller at the bow, wasn’t available some thirty odd years ago). Boats danced around each other

until finally there was space to move out into the water-filled iron trough that soars 120 feet above the Dee Valley.

Cleddau led a convoy of four, inching past boats at various pinch points. Then at Chirk Tunnel confusion reigned again. Were the lights in the tunnel an approaching boat – or a retreating one? Cleddau crept forward into the dark, only to meet a torch-bearing pedestrian, desperate for a break.

“We’re waiting to start through at the other end,” she said. “And NINE boats have come through…”

Time to be generous… Reversing is harder than going forward; reversing against a strong flow is even more difficult (remember, there is a downhill river flow on this canal). Back out of the tunnel Cleddau came, the convoy pulling up behind. Just the one (very grateful) boat came through so a second launch was made into the darkness. There is not a huge amount of space at the exit of Chirk Tunnel before Chirk Aqueduct. Three boats were already there, one waiting to pick up a passenger.  A boat was slowly approaching across the aqueduct.

There was temporary gridlock,

with one or more boats still in the tunnel, the basin now holding six boats, the latest arrival off the aqueduct in a stationary dither,

blocking any movement onto the aqueduct… The morning had become one tight squeeze after another!

At the southern end of Chirk Aqueduct there ‘s a Welcome to England sign.

Within minutes a sudden temperature drop led to rain, persistent and heavy rain.  A few thunder claps later, after negotiating past a cow swimming widths backwards and forwards across the canal, 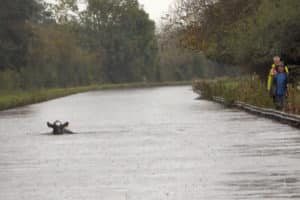 it seemed a good idea to pull in, tie up, dry off and to leave further Tuesday travel to the schedule-bound hire boaters…