To the summit in sunshine, downpours later…

Dane Aqueduct to Gurnett Aqueduct : 9.2 miles, 12 locks, 2 swing bridges
It was cloudless over the Cloud this morning 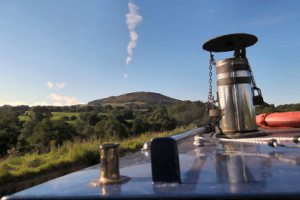 when Cleddauset off towards Bosley Bottom Lock. 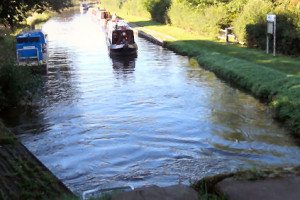 Though the sky was paint box blue at Bottom Lock in the shadow of the trees the air felt chill and dew still covered lock gate handles and paddles. Initially the flight was fairly quiet but then at about half way boats which had set off from the top in what the Captain calls “the ten o’clock rush” began to appear. Two boats travelling together had a spare crew member keen to wield her windlass; another boat had two crew members ashore, one of which decided to investigate Cleddau’s stern deck.  Only a grab on her red collar prevented the shiny black-coated cocker spaniel from sniffing  her way right through someone else’s boat. The sun shone: “The higher you get the hotter it is,” was one person’s summary… There was a flash of memory of a transit down these locks at Easter time, snow making life rather more challenging than today…
In about an hour and fifty minutes Cleddau and crew were emerging from Top Lock, 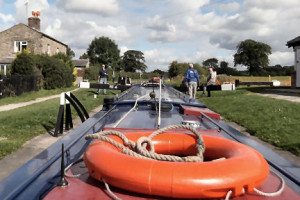 assisted by another boater and a volunteer lock keeper.  The boat was now 118 feet higher than it had been last night and the Macc summit of 518 feet above sea level had been reached.  To the east the ground is always higher, a prominent feature being what the Cheshire One used to call “my microwave mast.”  There are online moorings above the Bosley Locks and offside farm moorings a bit further on. The canal narrows, 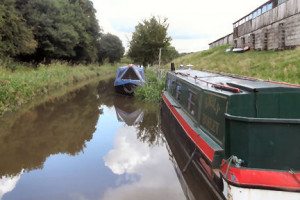 is shallow and approaching boaters do well to apply caution and patience.
Two Dalmatians caught the eye 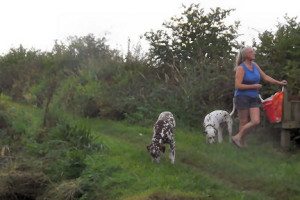 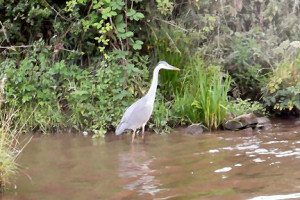 all unfazed by boats but intent on fish…
There have been some boat names to ponder upon: going down the Bosley Locks was nb Hard Work! (Why the exclamation mark?) Another boat was nb The Four Boys (an inheritance boat perhaps?) Moored at the top was nb Shebrokeus and then later was tied up a rather long boat: 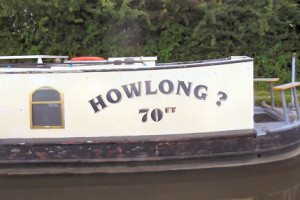 As it approaches Oakgrove the canal is a watery passageway hidden between trees and ferns. There’s the electrically operated swing bridge (five vehicles held up today) 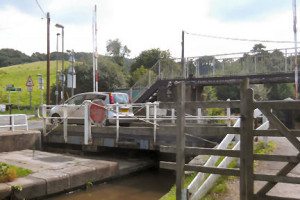 and then a mile or so further on is the often tricky Broadhurst swing bridge.

Hefty muscle needed here!
First time boaters and walkers this way will thrill at the next couple of miles: a bowl of hills spreads out before you, 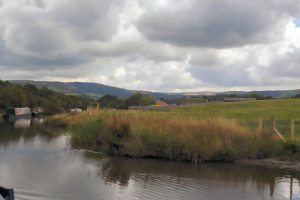 sweeping from Macclesfield Forest on the left and backing up into the Derbyshire Peaks.
It is Macclesfield – everyone knows it rains over Macclesfield…  As if on cue a series of sharp showers started. 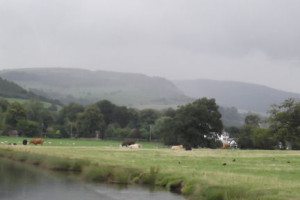 There is good mooring at Gurnett Aqueduct, convenient for a Garden Centre browse (Christmas cards on sale already!) and for an important early evening liaison at Sutton Hall pub. Frustrated by yesterday’s lack of aqueduct view here is a glimpse of Gurnett Aqueduct from below 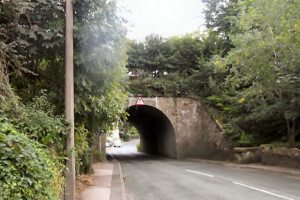 – an unglamorous view of the road running out to Sutton and Langley!
It’s a bare half mile to Sutton Hall pub, and at 6pm, totally drenched, the Captain and Boatwif paddled and squelched into Sutton Hall pub. There was the Cheshire One, flouncing about in a new dress. There was Techno Son-in-Law in a suit and tie (“I thought I ought, it’s what older people expect on their birthdays!”) and the Cheshire Mum, smart,  just returned from a London meeting. It may have been a week late but it was a good birthday bash! 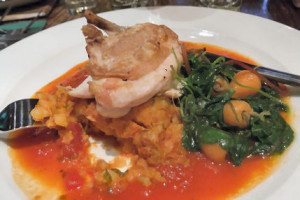