Troubles on the Long Pound

The Long Pound stretches between the top of the famous Devizes Locks and the four locks at Wootton Rivers, a distance of some fifteen miles.

How a day can start well – and descend into a catalogue of irritations and difficulties.

(“To remind us of where we’ve come from, Cape Town,” said the boat’s skipper). There were glimpses of curious buildings,

and a procession of children off on a nature walk.

A broad beam hove into view – a new (that is about 7 years ago) charity boat on the canal,

out on a training trip. Off the boats set, the Boat Dog and the Tentatrice Captain ahead somewhere on the towpath. The canal seemed dark, overshadowed by trees. There were glimpses of gardens 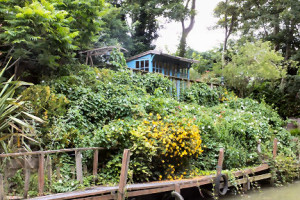 and hints of houses behind the foliage.

On the outskirts of town is Devizes Marina,

here the paint shop where Cleddau had a paint job back in 2002.

But there’s a marina village here now, the modern housing surrounding the boatyard. It looks jolly enough, judging by the barbecue and (wet?) guitar…

Reeds have encroached across the channel

and those African Queen moments of cruising down the Aylesbury Arm came to mind. Where there were boats moored (and there were many) sterns or bows were often tied far out from the edge,

the channel being too shallow to reach the bank. There was floral splendour in many places,

since these tied up boats seemed to sprout roof gardens

So many moored boats. There was a very red boat, named Lenin, bearing a figurehead on the front roof. 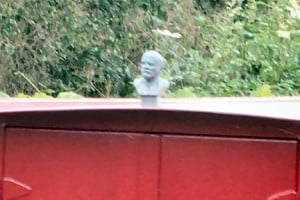 would there be anywhere to moor? There was a failed attempt to tie up at All Cannings, not enough space for two boats end to end, not enough width for two boats breasted up. A nagging anxiety began to develop.

Between the reeds and the greenery

came sight of a different sort of landscape. Ridge lines and chalk hills. In the distance was a distinctive shape, the White Horse

(more Grey Horse really) up on Milk Hill. This now is the land of wide sweeps of downland. Honeystreet was reached at last: long lines of moored boats (had some moved at all in recent months and years?) There was the Barge Inn, a magnet for crop circle enthusiasts,

all mooring spaces taken or the water too shallow to moor by the bank. Advice was sought, from locals, then from Gibson’s Boat Services… Go onwards, on towards Lady’s Bridge and Wilcot Wide Water. So, through the Lady’s Bridge (yet another tale of a rich landowner insisting on an ornamental lake if a canal were to cross through her estate) to a spread of water and banks overgrown with foliage.

In heavy rain now a battle got under way: to land crew, to throw, grab and secure wet ropes, then to organise and peg down gangplanks.

It was a beautiful spot, remote, far from road or rail interference – just the sort of place where you don’t want to have any problems.

Last thing, after an endlessly wet evening – and a leak through an air vent – the Captain spoke: “You know, I’m really worried about the electrics. The alternator and the State of Charge meter are just not making sense…”

Monday morning the meter reading was still worrisome. Up came the engine boards and investigation began. “The alternator’s burnt out, the domestic one,” came a strangled cry. There was talk of fuses (odd sizes) and wires (even odder sizes); there was scrabbling in lockers and cupboards for bits and an assembling of parts.

After a second attempt a cure had been found – and the boat was declared fit for travel.

Sometimes on this canal there are breathtaking sights – sights, that is, that make you gasp with incredulity. Shortly before departure this large barge moved past.

How would it be to confront that in one of the reed- choked sections…?

Untied, mooring pins and gangplanks safely stowed, the boats proceeded off in the drizzle, the mint not short of rainfall now…!

Pewsey Wharf was the first destination – just a quick stop for water and to drop off rubbish. Moored at the water point was this floating allotment: 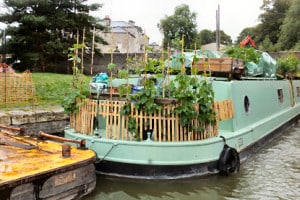 “We’ve only just come, it’ll take us at least two hours to fill up with water.”

Was this true – had they just come – or was the tale delivered in a French accent meant just to entertain…?

Meanwhile, was the Captain’s fix to the alternator holding out? Engine boards were lifted, a close look taken. The wires were hot – the boards left open to aid cooling. An open engine is noisier, while access from stern deck to cabin is awkward.

Onward – there were views again of Wiltshire Downs and a hill fort before a fallen tree across three quarters of the canal slowed the progress.

The heavy rains had downed it. The Tentatrice’s First Mate call to CRT brought little confidence that the obstruction would soon be removed… It was a squeeze to get round the tree and soon a lock, Wootton Rivers Bottom Lock, hove into view.

Moorings above the lock, easy access to a water tap and to rubbish disposal bins, as well as a road nearby brought hope that some, if not all troubles, could be resolved. It’s a pretty place – see here just two shots of the chocolate box Wootton Rivers village. 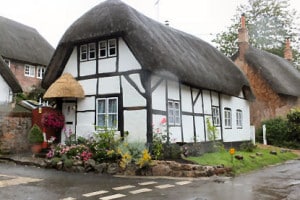 With the engine cooled the Captain returned to the engine ‘ole. Mangled and melted wires were not a good sighting. So it was callout time to RCR (River and Canal Rescue, the AA of the waterways). ”Bring thick wire,” advised the Captain. Within an hour or so an engineer from Bath was peering at the alternator. He cleaned it up, replaced the rogue wire, added another for good measure, ran the engine – and left. All was well…

… until arrival on Tuesday (after 4 miles, 9 locks and the 502 yard Bruce Tunnel)

at Crofton when it was obvious that a fuse holder had melted. The Captain set to again, replaced the fuse and holder and installed an extra warning light from the control system. Hopefully this is all a minor episode – and not a saga…? (*See footnote from the Captain).

Places to be passed through / maybe moored at in the next few days are Great Bedwyn, Hungerford and Newbury, or as the Cheshire Mum said in a phone call, “So you’re nearly in Berkshire then…”

Captain’s Footnote: Might the overheating of the alternator be the result of the engine frequently running at “idle” because of the need to pass the many, many moored boats very slowly, during which not enough cooling air is passing across the alternator?