Up, up and over the top…

Up the Grand Union – on a mission.

“Locks come thick and fast – but not fast enough,” the Tentatrice Captain remarked at some point. On a lock flight you don’t consider making a hot drink but hereabouts, where you meet a lock at half or three quarter mile intervals, there is enough time to boil a kettle – but not enough time to make or consume a hot drink! Watford lay behind, King’s Langley and Hemel Hempstead were ahead. Suburban gardens

and locks and modern workplace units

and locks and an old paper mill

By Wednesday afternoon Winkwell Swing Bridge had been reached.

Just beyond it was a good stretch of mooring and a pub suitable for Boatwif’s birthday meal.

3rd September: Onward, through Bourne End and Berkhamsted. Lock numbers are counting down, number 100 at Brentford,

Berkhamsted presents itself well: here is The Rising Sun pub,

a slick advertising board outside.

(Look closely). There are attractive balconies

and the town seems to value its canal heritage.

An unusual canal-side feature though is this, a totem pole

which recognises the links the old timber yard had with its Canadian suppliers. Still as the cruise continued there were visual delights, like the lock beam conversion to a seat on a stern

and the first sight of a Grand Union Pumphouse.

By early afternoon the summit level and Cowroast had been reached.

Why all the pressure to reach Cowroast? Well, those who know the layout of the Cleddau galley may recollect the proviso when the interior was being refitted (Winter of 2010/11) that the ‘fridge (Electrolux dual powered electric and gas) remained in place. 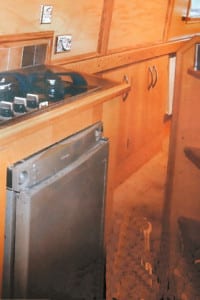 It had been installed in 2002 at Devizes and has given good service… until more recently in very hot temperatures. A couple of years ago a gas engineer at Market Drayton serviced it at considerable cost. Running it from electricity is a huge drain on the batteries – and running it on gas became problematic when the flame was difficult to ignite, or worse, refused to stay lit. When pouring away sour milk became a regular occurrence there was a Something Has To Be Done conversation.

“We’ve got to replace that ‘fridge…”

The route ahead was considered – and Cowroast Marina (nearest towns Tring and Berkhamsted) sprang to mind. What superb service there is there – a chandlery run by Natalie who sourced and organised delivery of the ‘fridge, a workshop run by marine engineer Darren who worked ‘til well after 6pm on Friday afternoon to instal the ‘fridge

and Pete, marina manager, who allowed Boatwif access to the marina laundry facilities.

It was a long, cold afternoon. Job completed Engineer Darren untied the bow, pushed the boat back out of the wet dock and locked the doors.

The Captain reversed the boat, slowly swung to the right and exited onto the canal where a few hundred yards along there was a convenient towpath mooring space right in front of Tentatrice.

Saturday 5th _ Sunday 6th September.  Away across the Tring summit, past moored boats,

heading towards Cowroast. Within an hour Destination Bulbourne had been reached. Here the old British Waterways Workshops retain their charm: solid buildings and a decorative tower sit very comfortably beside the waterway.

On a sunny September weekend Bulbourne and the 7 lock Marsworth Flight below it attracted the crowds: to walk around the reservoirs (there are three of them), to fish, to watch the wildlife, to walk beside the Wendover Arm,

to watch boaters negotiate the twisting lock pounds between the locks,

to support or take part in a raft event,

Mooring between the bottom and the second lock at Marsworth is a delight. Here too was moored nb Free Spirit.

Just over the bank is a reservoir. From here you can see the swans, hear the evening geese – and, if conditions are right, gaze at the sunset.

It’s all downhill now, all the way to the other side of Milton Keynes. Beyond the bottom of the Marsworth Flight is Marsworth Junction, where the canal descends sharply down 16 locks for nearly 7 miles to Aylesbury. On the Junction site is a striking new housing development.

Some of the units (“upside down houses of course,” said a local) are now being occupied.

They seem to offer the opportunity for glasshouse living…

Onward on Monday to Ivinghoe. Look closely and you’ll see apples, plums and sloes in the hedgerows and the occasional thatched cottage.

(Oh, Dunstable and District Boat Club… is this Bedfordshire now?)

There was ‘a floating forest’,

a boat from Macclesfield

and a cormorant sunning itself on the overhead wires.

indicating where the single locks were replaced by double (14 feet) locks.

Ivinghoe and the Chiltern chalk ridge to the east.

These grand and airy views are surely a very fine reward for the effort expended in reaching them!

Tomorrow – to Linslade. Will the underwater magnet near The Globe still exert its power…?

‘Fridge footnote: The Captain is relieved to report that he is no longer concerned about the overnight consumption of electricity.