King’s Lynn is a good-looking town, as had been discovered in a recce in February 2014.  However, the plan for a two night stay on the King’s Lynn pontoon had been foiled as spaces on it for Friday night had been previously booked. The boats had to clear the mooring by 12 noon – and the departure to Denver had to be at the midpoint of a rising tide.

Hence “See you at 0600 tomorrow,” had been the departing words of Daryl Hill, the pilot who had guided the Cleddau and Tentatrice crews across the Wash on Thursday.

There is not much activity at 0545 on a Friday morning in King’s Lynn, even if it is the first of June. A trim young woman was pounding and power walking along the quay, a performance tracker strapped to her upper arm. A care worker gained access to an apartment complex – and nobody else was to be seen.

A memory stirred of an interesting sight further along the quay: yes, there was the Custom House 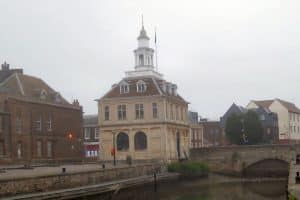 and the statue of George Vancouver .

Two heavy anchors and the great chains that snake from them across the cobbles indicate that this has long been a sea-faring town.

Visibility over the river was poor, certainly not ideal for transit along unfamiliar waters…

The pilot arrived. He walked to the end of the pontoon beyond the Baden Powell heritage boat.

He gazed for a while at the water levels and then announced that it was time to go. It’s a fine judgement – sufficient water in the river channel, the tide pushing from behind and enough water at the lock at Denver Sluice which is 14¼ miles upstream.

Cleddau was untied and pushed away from the pontoon. It was 0628.

Silently the incoming tide swirled around the pontoon end. 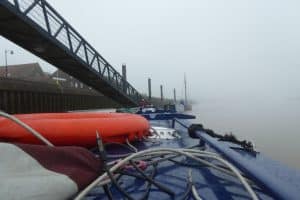 Revs were low until the piloted Tentatrice was in the lead.

There were two bridges ahead

and then a pair of markers.

Where house shapes could be seen in the murk they sat low below the bank.

During the previous day’s 30 mile trip across the Wash the Captain had found time to revisit his long time gone past: “Same techniques in following,” he had said, “as in formation flying…” Now, still at sea level, this was formation cruising again.

“!’m following the track they’re making,” explained the Captain, “turning where they have turned, not when we see them doing it.”

Passing in the murk the first church…

Passing the second church, the one with no roof, keeping close in to the bank. 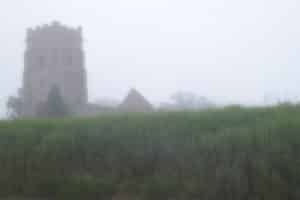 In the fog senses are heightened. Birdsong could be heard – and a tinkling as the S hooks that hold the spare ropes in the engine room clashed with each other.

“Fog thickens before it clears,” said the Captain. Was that reassuring?

Speed 8.6mph, the engine aided by the fast-flowing tide.

7.6 mph. The twisty section, a zigzag from side to side.

On the left hand bank a man walked his dog.

The world was waking up: a heron swung above, searching for a breakfast fish. A swan took off over the river. 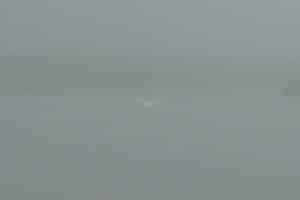 Salter’s Lode would be coming up soon, providing a navigational route to the Middle Levels, Peterborough and the Nene.

Small cottages (or were they tall houses behind high riverbanks?) could be seen.

And then, there were the poles indicating Salter’s Lode Lock

and the lockkeeper’s house beside it.

“There’s a sandbank there,” Daryl called back, indicating the area to the right of the lock chamber.

The lockkeeper operated the guillotine gate. “Ready?” And down the boats went, down from the higher tidal level onto the Great Ouse. 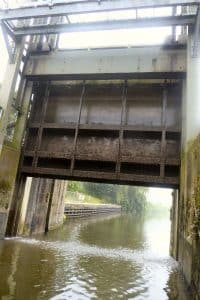 Time to switch off the tunnel light.

There’s a tap round the corner. The boats motored round and tied up side by side. It was thanks again and farewell to Daryl.

What a brilliant job he had done in safely navigating boats and crews onto safe waters.

Hose pipes out, the tanks needed filling and the boats needed washing down to get rid of the salt…

The day became a day of twos – there had been two boats up the tidal Ouse, two boats side by side in Denver Lock, two wash loads completed in the faithful Zanussi machine, two refills of the water tank, two breakfasts (the first at King’s Lynn, the second at Denver),

Distance and locks remaining to Bedford from Denver: 68 miles, 15 locks