Canal and River Trust welcome volunteers to fill a host of roles. Most visible of course are those who fulfil lock keeping duties. Both on Cleddau’s outbound journey towards Liverpool and on the return journey there was a volunteer lock keeper, clad in yellow hi-vis jacket and buoyancy aid at the Middlewich Three.

Middlewich is an interesting place for boaters: 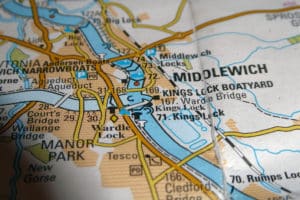 coming from the north there is the oddity that is Big Lock (wide enough for two narrow boats side by side), followed half a mile later by the three Middlewich Locks, 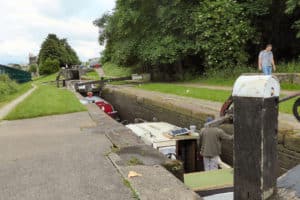 two obviously visible, the third round the bend at a sharp 90 degree angle. Cruise a couple of hundred yards on – and take your pick (knowing your destination is important). Either take the sharp right at the junction up through Wardle Lock – and on towards Chester or to Llangollen, or go straight ahead, up through King’s Lock, and continue south along the Trent and Mersey Canal.

Back to the volunteers: it was Monday morning at about 10am when Cleddau arrived below the bottom of the Middlewich Three. It was raining (hard) and there seemed to be some consternation among the ladies present at the bottom lock. There had been a drama, apparently: a narrow boater from the north was making his first ever trip south into narrow lock land. Into the bottom lock he had gone – and become stuck! Stuck because the thick fenders (go-kart tyre width) attached to the sides of his boat are ever present, ever useful on the wide locks of Wigan and the Leeds and Liverpool Canal… but not so in the narrow locks of the Trent and Mersey Canal. “Never seen locks like this!” he had reportedly said, and the boat had been slowly dislodged, hauled back, fenders removed – and after a full half hour delay safe lock operation resumed… It was only later it seems that a volunteer lock keeper appeared on duty, by which time the lock queues at top and bottom had been reduced. A helping hand with a bit of paddle winding and gate pushing was welcomed though by the Cleddau crew. Volunteer lock keepers, it seems, are positioned where boat queues can build up – but of course there is no guarantee that there is one around when needed!

The remaining five locks on Monday, spread over the next three miles up out of Middlewich, were tackled stoically, in heavy rain, in full waterproofs, with no further assistance… and with no camera exposed to the downpour.

It was a different tale though on Tuesday, when by pre-arrangement there were two volunteers on board. Tim and Jan, the Stafford campanologists, (three crew stints last year) joined at Wheelock and finished at Church Lawton, 20 locks and 6.5 miles later. This was volunteer help gratefully received: if the cruise involves just pootling along that’s fine by them, but if it involves a bit of lock work that’s acceptable too. In the event Tim steered through about 16 locks, 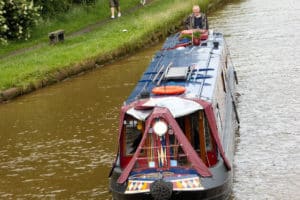 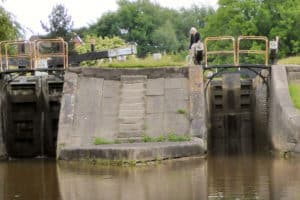 (distance walked probably at least four miles each). At the end of the day were the Cleddau volunteers disappointed with how the day had worked out: prepared for workouts in deluge conditions they left with the spare dry clothes and extra waterproofs surplus to requirement! 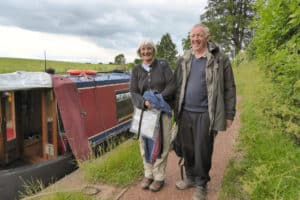 Wednesday was another day for meeting the volunteer spirit. There were the boaters ahead at Red Bull who raised a paddle to help empty a lock. There was another volunteer lock keeper (in yellow hi-vis jacket and wearing a buoyancy aid) at Lock 42 and at Lock 43 there was an extraordinary little volunteer. He was a small boy, aged about 7 or 8, wearing a life jacket, windlass in hand. “This is Aiden,” announced the lady boater from the far end of the lock. “He’s offered to help.”

There on the other side of the lock, skilfully wielding his windlass was “Aiden”. The paddle was stiff, very stiff – and his light weight frame couldn’t complete the job. He accepted help, saying “Let me show you a trick a friend of mine invented,” and quick as a flash the paddle was being raised aided by two windlasses being turned by two pairs of hands. Boatwif had seen the technique before, but the lady boater hadn’t.

Job done, the boy was thanked and congratulated, then he skipped off to rejoin his parents as they watered up their boat at Red Bull Services. The family lived on board apparently, along with a small brother and a small dog. Then ensued one of those cross the lock conversations you don’t anticipate – the logistics, pros and cons of home educating a child while travelling on a boat…

Top Lock of Heartbreak Hill. Boatwif’s performance in the lock was scrutinised by two walkers. “You’re looking at the blunt end, you need to look the other way for the sharp end,” said one. Despite such remarks the boat remained under control and the fiddly exit past a C&RT workboat and pan was made smoothly. 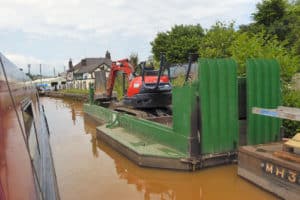 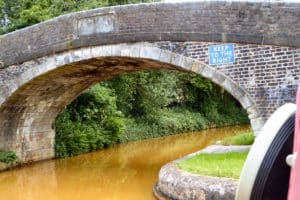 But is it the Macclesfield Canal yet? Within a mile there’s another sharp right at Red Bull Basin, 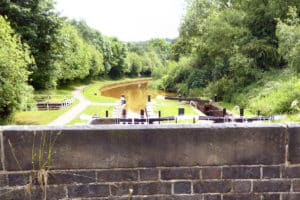 and within another mile reaches Hall Green Stop Lock. 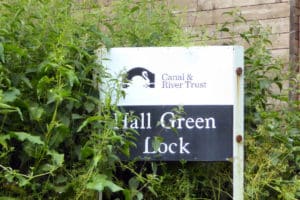 Here, officially, starts the Macclesfield Canal. It was now 1250.

The Stop Locks (there used to be two) were installed to protect the waters belonging to individual canal companies. Now though the remaining lock has a barely noticeable rise of about 13 inches and passage through is usually completed swiftly and painlessly. On Wednesday though Hall Green Lock provided some unusual interest. There were a couple of C&RT staff loitering there. 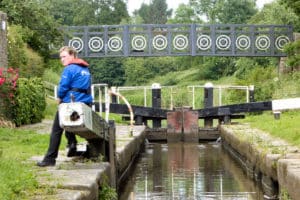 They helped (Thank you!) but were really waiting for the return of this curious-looking vessel, 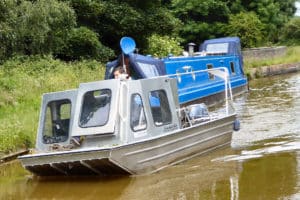 a survey boat measuring the water depths in the canal. (“Why not ask a boater!” someone muttered later). 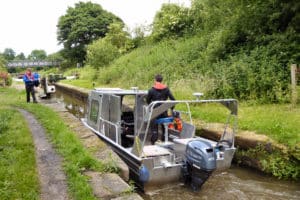 From the opposite direction came an old motor boat Forget Me Not towing an engine-less butty, Hazel, 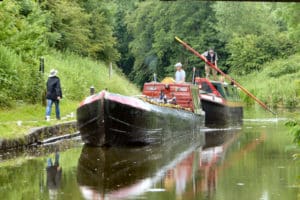 which pulled in at the water tap. The boats are en route from Aston-under-Lyne to Middlewich for the Middlewich Folk and Boat Festival. Hazel, 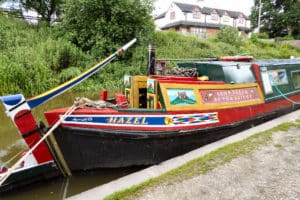 dates from 1914 and used to carry salt and coal between Lancashire and Cheshire. Hazel! She’d been up on the side under restoration when spotted in June 2012 en route through Aston to the Huddersrfield Narrow Canal. (See eighth photo down here).

She was re-launched onto water in May 2013 and now has been restored and fitted out as a residential boat for short breaks for people coping with mental health issues. 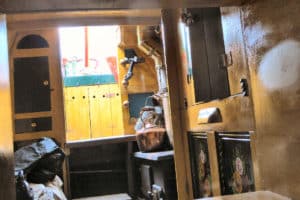 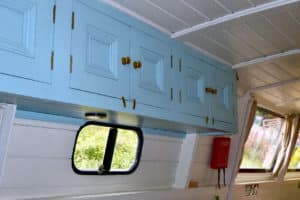 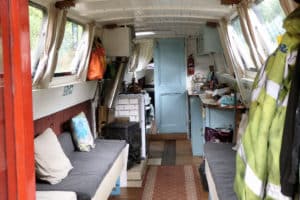 Two of the crew are volunteers, new lives found for themselves through being active and busy. They bubbled with enthusiasm:

Never been on a boat ‘til eighteen months ago, now I’m steering the motor boat… 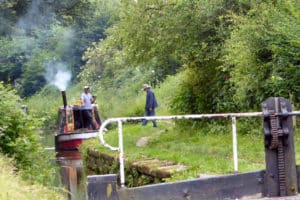 And I’m learning all the time…

I can steer the butty now and I know some knots… 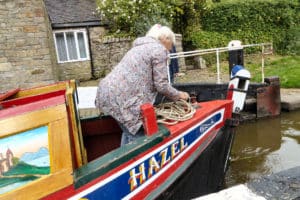 I’m learning about the history…

We get on with each other… 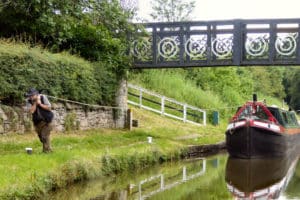 There were two paying guests too. Folk can bid for berths for one or more nights. This charity, the Wooden Canal Boat Society  (tag line New Lives for Old Boats) sets out to support lonely and distressed people as they try to build new lives through a range of volunteer activities. It deserves practical and financial support.

An overnight mooring a mile or so further on was found at a favourite site – the Ramsdell Hall railings, 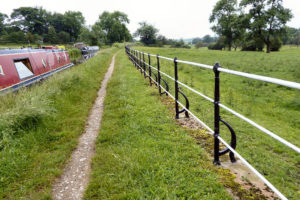 their splendid condition due to the voluntary efforts of the Macclesfield Canal Society. It feels rather good to be back on the Macc! 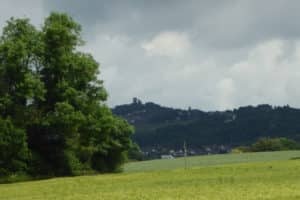 Monkton Moment*: 1 (a reference to or recognition of Cleddau’s Pembrokeshire connection)