From the narrow twisty River Wissey

– to the broad man-made Relief Channel.

On Saturday Tentatrice and Cleddau left their Wissey moorings, cruised the short distance further north to Denver – and bore right at the Denver Sailing Club to access the Relief Channel Navigation.

After the devastating North Sea floods that overwhelmed many East Coast communities in 1953 improvements to river flood banks were made and new infrastructure was constructed to prevent a recurrence of flooding on such a catastrophic scale.The Relief Channel (cut during 1960 – 61) runs parallel to the tidal Ouse from Denver almost to King’s Lynn. It’s 10½ miles in length and is straight – dead straight. The Environment Agency constructed a lock at Denver in 2001, thus allowing boaters to visit the small fenland town of Downham Market.

The lock is deep, (estimated at 12 feet) 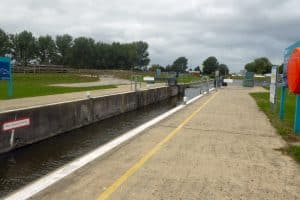 operated from a control box at either end of the lock.  The box at the upper end has a keyboard within it, the small screen relaying the message that you are already logged in… Really??

The two boat crews checked out the lock exit visually before beginning the descent. A sharp left turn is required – and just to make things a touch more challenging a fisherman on a small fishing boat was moored directly opposite the lock exit…

The boats moved into the lock, were secured with ropes and the press button challenge began.

With doors and slackers closed at the top end the operation to drop the water from the bottom end could proceed. There was a certain to-ing and fro-ing along the lock side to re-close doors and slackers and to re-start the operation. How fast would it be? How fast would the boats drop? It was not fast at all – and some 20 minutes later Boatwif was able to stand on the pontoon below – while the Captain jiggled around the fisherman who had re-positioned himself, awkwardly, on the pontoon just where crew would need picking up…

Oh, how wide the Relief Channel is!

Locals who know the Channel scoff if you ask whether you can turn a 60 foot boat easily – of course, it is about 200 feet wide.

and mooring pontoons on the west bank. It’s obviously a popular place – see how mooring was achieved

so that a Tesco dash could be made. (Relief as the cupboards were restocked!).

Downham Market is a town which takes pride in its floral appearance. There are flowers baskets on the bridge, 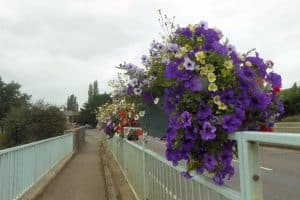 flowers in the market place

and a Gold Award presented last year by Anglia in Bloom.

The very striking town clock in the centre of the town was renovated with Lottery Funds in 2004.

and some buildings deserve more than a cursory look.

The boats pushed on during the afternoon, passing the pontoon moorings at

Stowbridge and tying up on the final Relief Channel pontoon at Wiggenhall Mary Magdalen bridge. These pontoons are a delight, each having a water point for boaters’ use.

Just visible from the waterway is a church tower; how close to the pontoon would it be?

Up at road level there are fifty yards or so to walk to another bridge,

this one over the tidal Great Ouse.

(You might spot how the Relief Channel is visible from the river bridge). It was a walk over a bridge that the boat passed under on that murky early morning on 1st June  when the boats cruised upstream from King’s Lynn.

Well chosen words on a banner promoted an upcoming event…

and just a few yards further on stands the church of Wiggenhall St Mary Magdalen.

It was open and a visitor quickly senses that this is an active parish.

Church attendance is higher than average for a rural community, the key holder /rector explained. “We used to have one family service a month, but now it’s two, by popular demand.” When the bells rang out the following morning

village folk, young and old, could be pictured hastening to their church.

Their village escaped the 1953 floods, not so the next village along where a million sandbags were used to plug a breach in the river bank. (Source: the rector again).

Wiggenhall is less than two miles from the Relief Channel end of navigation, so it had to be viewed, didn’t it…

On a blustery morning the boats left Wiggenhall

small craft it seemed on such wide water. A bridge hove into view,

another ahead of that. And here the navigation ends.  Look hard, boaters, and you’ll spot the small signs either end of the first bridge.

Beyond it is a water ski area and beyond that can be seen the silos of King’s Lynn industry. Somewhere in the distance is where excess water from the Relief Channel enters the sea…

Is this waterway busy? Yes, on a summer weekend some cruisers wanted to get up to speed,

and yes, a jet skier (illegally!) showed off his skills at Downham Market,

but the water is wide and deep. As for moorings there are three separate 48-hour  pontoons.

before a smooth but slow ascent back up to the Great Ouse.

and that would be a fairly long wait.

Relief Channel to end of navigation and back: 18¼ miles, 1 lock (twice)