Whose time is it anyway?

To Heathrow, for a transatlantic flight.

How many hours ahead of take off do you need to be there? How much time do you need to build into your plan to allow for traffic delay on the motorways or congestion at the airport…?

On Wednesday Storm Abigail had blown herself out but Storm Barney was still a boisterous intruder. Traffic on the motorways was flowing freely and so by 1230 the Captain and Boatwif were through Terminal 2’s security channels, with still two hours to wait before the boarding gate would be shown.

With a nearly twelve hour flight ahead a long walk (advised on electronic displays as taking 15 minutes) to the boarding gate from the waiting area becomes A Good  Thing – a last chance to flex joints and muscles before  becoming human cargo folded inside a metal container.

the Air New Zealand Captain explained the flight route to Los Angeles.  It would be  “north east over the top of Scotland, north of Iceland and across Greenland” before reaching Canada and flying south down over the western States.

The plane rumbled down the runway. First the nose, then the body of the aircraft lifted, skewing a bit as it met Storm Barney’ s irritable temper. The Heathrow reservoirs appeared below, then a dark streak, the Thames, was glimpsed and a momentary view caught of Clivedon, high on its perch above the river.

The moving map display showed the aircraft above Birmingham – then Sheffield – then St Andrews. At 1645 the Moray Firth and Dornoch Firth lay below (Hallo, Scottish Sis…) before the aircraft veered west as well as north.

It was dark outside. From time to time the seat belt signs pinged on, advance warning of the next bout of turbulence. “Just ‘mild chop’” pronounced the Captain, reassuringly, thinking back to his own cockpit years.

The hours wore on.  Boatwif found escapism in a double dose of Dames (Maggie Smith and Judi Dench) in The Exotic Marigold films.

Out on the horizon then, on the starboard side, appeared a straight line, topped by a glowing faint orange line, some blue and a denser grey above.

It was during this limbo period (What time of day or night is it? Which continent is below?) that the first mention of a time switch occurred. “Time to change your watch,” said the Captain. “Time to set it to local time.”  But it seemed far too soon to submit to such a thing.

Cloud layers swarmed below the aircraft. They presented another world, one of rolling plains and gentle hills. Now it seemed as if a lake were in the centre, a rosy glow rising like a steam cloud around it.

Soon a widening fiery band stretched across the sky – and on the plane flew, above  Arctic desert, mountains, lakes.  A watery shape intrigued – from above it resembled the island of Great Britain, the bulge of East Anglia and the extended westward arm of Cornwall plainly apparent.

“What can you see? “asked a passenger passing down the aisle.  She had resolved to stay awake for the whole 11+ hours of the flight to LA.  Here she, and others, would disembark for two hours then fly onward for a further 13 hours to Auckland, New Zealand.

“You still haven’t changed your watch then?” remarked the Captain.  It’s a bizarre thing, changing the time on a watch. Some folk struggle more than others with the twice yearly clock change in spring and in autumn.  But when you are thirty thousand feet up in the air and your body time is in mid-evening, the sky looks as if it’s about to burst into daybreak and you are switching your watch back eight hours – it feels unreal, as if it’s an academic exercise. Back home the Cheshire One would be in bed – while ahead the Cal Three would be just out of school… and the Auckland bound passenger was going to miss most of Thursday and land on Friday…!

On a long flight it becomes easy to classify neighbouring  passenger types: there are those who adopt a Lock Out strategy, hunkering down under a blanket,  headphones and ear defenders; there are the walkers who frequently pass by, some as toddlers with parents in tow; there are slumberers, drifting in and out of sleep – and there are wrigglers.  Travellers in this last category may be attention seekers who order separate meals, frequently search for items in the overhead locker, vigorously rearrange their seating positions and clamber out to the toilets to adjust hair and personal hygiene…

0050: The aircraft crossed the Canadian border into Montana. 0100: overhead Idaho.  By 0105 the aircraft was on a parallel with Spokane.  “Good morning,” announced the cheery flight attendant’s voice, “your choices for supper are…”

At 0118 the aircraft was above Oregon and at 0216, just east of Lake Tahoe, it crossed into Californian airspace. It was time to submit now – and adjust the watch to local time.

To emerge from the LAX terminal onto the street is to endure an assault on all senses. Harshly hooting horns, shrieking brakes, hot air so laden in particulates that throats and lungs prickle, vibrant colours emblazoned on buses and taxis, the heavy smell of diesel… 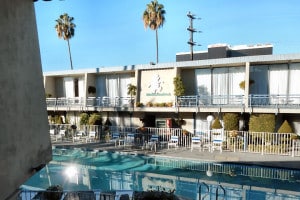 at a “vintage fifties” Travel Lodge the weary travellers rose early, negotiated a hotel bus drop off at the car rental depot and by mid-morning they had slunk out of LA and driven south.

While the Cal Three were still in school there were familiar views to be checked out, 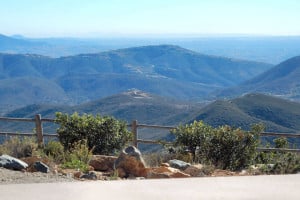 bottled water to be bought for the car and, blame a packing oversight, sunhats to be sourced… Though winter may have arrived in the UK and in the central and eastern states, here in Southern California temperature highs are firmly in the low to mid eighties Fahrenheit… 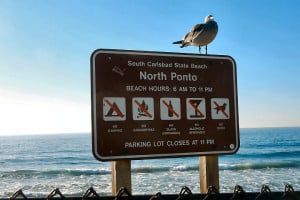