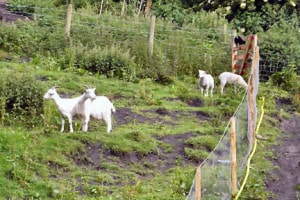 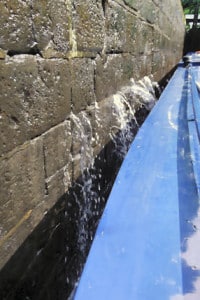 It was always going to be a long trip, direct from the moorings at Slaithwaite to Aspley Basin in Huddersfield, a distance of 4.77 miles and 21 locks. The Captain walked most of the towpath between locks and since the last boater down in these parts did not close the bottom gates at any lock his task (twenty one times) involved dealing with five gate movements at each lock, a huge amount of walking around each lock chamber, much fiddling with the ant-vandal key and then at lock 3E (the eighteenth of the day) having to retrace his steps back to the boat to collect a BW key as well… Now moored safely at Aspley Basin (which connects the Huddersfield Narrow and Broad Canals) readers may not be surprised to read that the Captain is currently horizontal, inspecting the inside of his eyelids…

Not one other moving boat was spotted today and the lower section of the tow path had fewer walkers than further up. Once someone helped with a gate but otherwise it was a lonely transit. Down Cleddau came, the river still to the right, fields and trees, derelict mills and stone bridges punctuating the passage. At times progress was slowed by the need to pole the boat out of shallow water. One section, becoming overgrown with reeds either side, brought back memories of that African Queen experience at the lower end of the Aylesbury Arm. Then, as the canal approaches Huddersfield, some mill buildings have been redefined as apartments. “What’s that say?” shouted a light young voice. From a lower window two pre-school age little girls puzzled over the boat’s name!

Then came a mill still in service, its machinery clacking busily, textile rolls piled high against the windows, a worker high up on a fourth floor fire escape engaged in lengthy mobile phone conversation.

On the canal went, then the asymmetric alignment of high railway viaduct and lowly lock chamber. Such varied foliage sprouts from the lock walls, do no other boats come this way?  A sharp right angle turn and on … when would the 355 yard Sellers Tunnel be reached… But when it came it was gone! Redevelopment has removed the roof, refreshed the channel footpaths and replaced the lock. Right beside a brand new building complex (“We’re building a new college, love,”) sits a brand new lock, wider than a conventional narrow lock although not of broad beam dimensions. Yet, suggestive of fountains leaping and dancing to music in Las Vegas, the new gates leak!

On the canal creeps behind buildings, through Bates Tunnel (with roof), through the channel where the sides are reinforced by huge iron girders, until it reaches the university. There a couple of folk watched from the bridge by the Computing and Engineering Department as Cleddau held off, waiting as she’d waited so much throughout the day for the chamber to fill.

In sharp rain and a blustery breeze Aspley Basin was reached. A pair of colourful hotel boats was filling up with water and the proud owner of a new wide beam boat cheerily encouraged the Captain’s long reverse to the designated mooring space. Behind is the Locomotive Bridge on the Huddersfield Broad Canal which within four miles leads to the Calder and Hebble Navigation, names from the north…

From Dukinfield Junction, (the start of the Huddersfield Canal six days ago) it’s been a mere 20 miles but 74 locks. Cleddau is now moored up, plugged in to an electricity supply, more than ready for her few days’ holiday in Huddersfield! Time for the crew to retreat south to Bedfordshire for a few days.

Check back on the blog, maybe Thursday, by when the long return should have begun.

A postscript: Anxious about yesterday’s side hatch flood? Pleased to report that tonight the side hatch mats and the bedroom carpet have been relaid.

A second postscript: the Captain has observed that “northern girls” at the Aspley Marina pub tonight were sitting outside in the cool air wearing less than Boatwif wears to bed within a heated boat…hmm!