Worcester and the Upper Severn

Unladen and fully laden boats had passed the Upton moorings repeatedly on Tuesday and Wednesday morning; 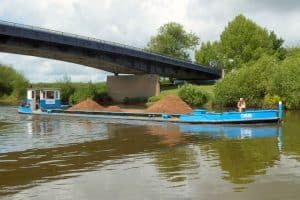 was where the loading was taking place, just a couple of miles upstream…

There were soon signs of ‘the Birmingham Navy’, lines of white moored craft

(“This must be the southern task force,” the Captain remarked wryly. “The main fleet is usually up at Stourport.” And so it transpired…)

and a mystery boat, in what must be a specially tailored zip in cover…

Just before Diglis Lock at Worcester  is a new footbridge

and a hundred metres or further on some fairly new pontoon moorings, a good place to moor,

it seemed… It was  closer to the city, with a splendid Worcester Cathedral view –  but with absolutely no visitor car parking available.  There is designated parking and gated areas for the residents of the desirable apartments which overlook the moorings, electronically monitored and £100 fine threatened

– so with Boat Dog Monty expected the next day the pontoon stay was for one night only.

Worcester is a compact city which deserves exploration.

Positioned beside the mighty River Severn it’s known its fair share of floods. Beside the water gate are flood mark bricks:

see the height of the March 1947 (first blue brick on the left), the July 2007 (brick on the right) and the February 2014 flooding. A city guide explained how she remembers the March ’47 event, the sudden thaw after the very long snowy winter…

There is much to see and learn about in the Cathedral: soaring columns, 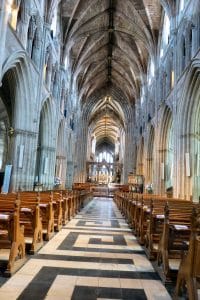 a chapter house supported by a single pillar,

and 15 bells in the bell tower.

Worcester was always a Royalist city – the frontage of the Guildhall has statues of both Charles I and Charles ll,

and among other portraits in its glorious Assembly Room,

is one of Queen Charlotte

Not visited was The Commandery, the Royalist Headquarters during the Civil War. Right here in the city streets in 1651 the Battle of Worcester, the final confrontation took place.,

Further along the street is the house where the very tall Charles ll acquired disguise and fresh horses to make his escape after the ignominious defeat.

A much celebrated Worcester personage is composer Edward Elgar: in the Cathedral there’s a plaque

and a stained glass window featuring The Dream of Gerontius, 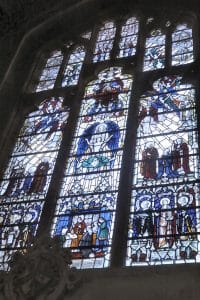 there’s a bronze statue near the cathedral, a plaque marking the family home

and a bust inside the Guildhall.

provided a final Cathedral view and one too of the Glovers’ Needle,

the slender spire of the church in the glove-making district.

On a seriously hot afternoon; the Tentatrice crew came a-calling and the Boat Dog

sought refuge under the shade of the racecourse trees… Lively evening entertainment came from the many rowers and dragonboat racers on the river.

and the finely feathered busker… 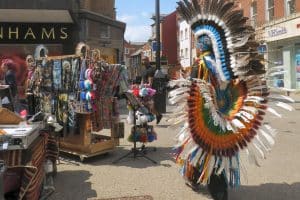 Onwards on Friday on the final stretch on the Severn. After the city there are wooded stretches

and gradually the river narrows. Pontoons and a white building indicate the entrance to the Droitwich Barge Canal.

The river banks become lower and across the river is a bridge span, the Telford-designed Holt Bridge.

In the bright sunshine, the holiday chalets offer chance of an idyllic escape!

There are liveaboards on the river frontage, then, an unusual sighting, there was action at the Stourport broad lock. (“The Yacht Club’s going out, to some festival at Upton,” explained the lock keeper on duty in the Basins. “I’m being kept busy.”)

Up onto the canals – only two double staircase locks to contend with, while ignoring the din of the shot blasting from the boatyard

and the flashing distractions of the funfair.

In the wide spaces of the Stourport Basins 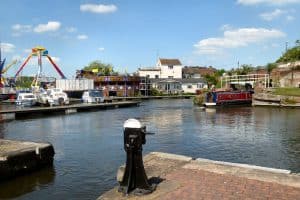 the swirling wind prompted boats to slow glide in unchosen directions as they endeavoured to weave their way past the many moored craft.

It was a stiflingly hot afternoon and night – salvation came in the form of a pub meal and a table right opposite the air-conditioning unit – such bliss!

Next up, back on a narrow canal…