Cleddau is heading south (down the Macc), then north (down the Trent and Mersey) then east and north again along the Bridgewater Canal. No new waters and no great adventures are planned, but all being well there may be a new terra firma location to visit…

In previous years exciting watery trips (crossing the Ribble and the Wash, cruising down the tidal Severn, doing the tidal Thames) have been enjoyed alongside the crew of nb Tentatrice.  Sadly that crew is having to sell their much-loved boat. It’s 59 feet long, only eight years old and for prospective buyers details of it can be found here. Take a look.

“Isn’t it cold in winter?” is a Frequently Asked Question posed by gongoozlers about living in a boat. No such question in recent days when concern has been more about keeping cool than about keeping warm… An electric fan (purchased many years ago, if remembered correctly, at the Tesco Superstore beside the Thames in Reading) is this week’s most frequently used item!

Drivers on a regular route will know where to stop for fuel and for comfort breaks; the Cleddau crew know where to stop for good views and sunny spots. To try visualising shady stretches for afternoon and overnight mooring has added a new dimension to this current cruise. There were two nights on home moorings at Higher Poynton, with a background soundtrack of sheep in the field behind the boats, a night at Danes Moss on the southern outskirts of Macclesfield, skulking under the trees, occasional Manchester-London trains whizzing by a hundred metres away, a mooring somewhere south of Congleton, selected for hedge and tree shade, secateurs deployed to cut nettles and brambles back from the towpath edge and a night below Lawton Locks (not quite in Alsager or Rode Heath or Sandbach…)

Stick a table and a couple of chairs out on a towpath and people will stop and talk: ‘Commuting to work by bike and train’ was the story of one man’s life one night, ‘Why I litter-pick this stretch of canal’ was the subject of one active but aged lady one evening, and ‘How the pandemic has changed our personal dreams and my partner’s work life’ was a subject on another occasion. It’s curious that despite passing through umpteen locks to date and crossing with many upcoming boaters it’s been the evening towpath conversations that have been more extended…

Cleddau set out from Higher Poynton on Tuesday morning: 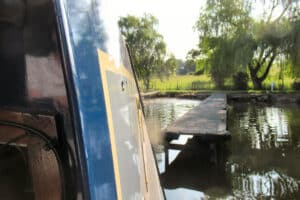 the skies were blue, the sun hot and dappled shade a great relief… The window painters were busy at Bollington’s Clarence Mill 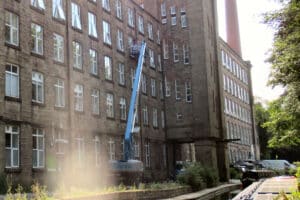 while only three miles further on, opposite Hovis Mill in Macclesfield, the collapsed garden wall is at last being dealt with. 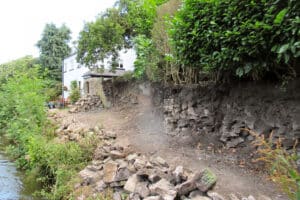 The towpath stretch between The Puss in Boots pub (about 100 metres) remains closed but the stones from the wall are being dismantled and graded, it would seem.

Will the towpath reopen this year…? And just a couple of hundred metres further on is the evidence of the culvert repair that took three long months earlier this year: here’s the rebuilt wall and here (red arrow) seems to be a culvert marker

(hopefully there’ll not be a third emergency here…) 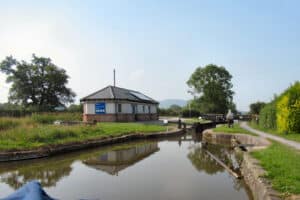 Currently the locks can be accessed between 0830 and 1300. Down Cleddau progressed, crossing with upcoming boats between locks 3 to 12, in a very respectable time of 1 hour 40 minutes. See how high the growth is at the edge of the towpath between locks 1 and 2;

the lovely patch of grass at lock 9 resembled a hayfield 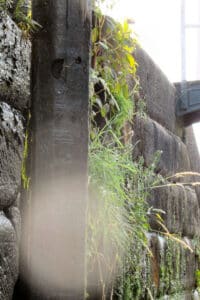 At the bottom of the flight 5 boats (and crews) were nervously waiting to start their ascent, keen to get locking before the 1300 deadline was reached…

Onward, underneath the railway viaduct, past the former residence of the pretty painted cow

(what happened to her??)  through the dappled shade, casting glances up at The Cloud, 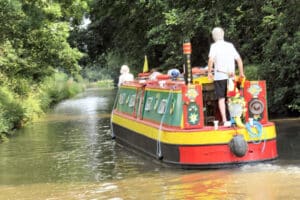 (she is normally moored at Teapot Hall) 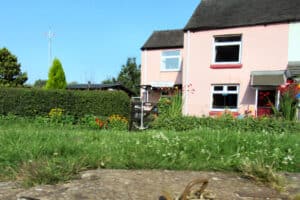 The feet seared with the heat – where would be a shady mooring?

and not at a favourite open spot a half mile further ahead at Ramsdell Hall Railings there was an early start for some serous work ahead.

There’s a sharp left turn at the end of the Macclesfield Canal to join the northbound Trent and Mersey Canal. How the scene has changed here: a newly built Lidl has opened in recent months

and The Canal Tavern has had a distinct makeover (recompense for damage sustained during the Lidl construction, according to a volunteer lock keeper).

Down Heartbreak Hill, 26 locks over two days onto the Cheshire Plain and then a further 9 locks to moor below Middlewich on the third day. Unnoticed previously was a date (1895)

in the top chamber of the Church Locks.

The conveniently flat surface at the Snapes Aqueduct mooring allowed for a table in the shade, “My office,” the Captain announced, before setting up a laptop and paying some online bills…

Blue seemed to be the colour of the day: blue of the sky above Mow Cop,

blue on the Canal and River Trust workboats at the Rode Heath yard, 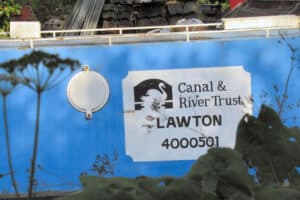 blue of the towpath blooms. 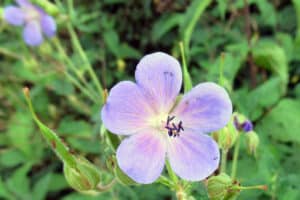 while just by Thurlwood Lock fearless roofers were installing skylights.

Whichever way the wind was blowing for once the roar from the M6 seemed relatively quiet! 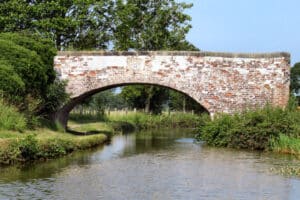 (passing this way with her in icy conditions in December 2017) to find an extraordinary sight, a man with a can. 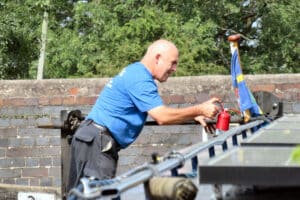 At Lock 60 (by the golf course) a C&RT worker was oiling the paddle gear with a shiny red oil can. A welcome sight!

was reached on Saturday. It had the feel of a holiday destination, a floating market above King’s Lock,

crowds of gongoozlers at the top of the Middlewich Three,

boats jostling to come up the flight, fighting for space alongside the Andersen fleet which was lined up way past the wharf and the park, ready for the Saturday hirers…

This is a fairly familiar route but these boats, unseen before, all caught the eye:

As for Cleddau’s intended route: it’s this: