There’s been a huge expansion in home deliveries in recent years, Tesco and Ocado and the like buzz about delivering to houses, flats, palaces (maybe) and even boats…  Now on behalf of Sainsbury’s the Cleddau crew have made a delivery drop in Southern California…

Foolish enough to ask family members if there were any shopping requests from the UK their answers were swift and decisive: “Chocolate drops,” said Cal Gal. “Smarties,” said Cal Guy Jnr, “and Jaffa cakes – plus a large bar of Cadbury’s Dairy Milk for my theater teacher’s birthday,” insisted Cal Guy Snr. There was unanimity about another edible too, Hellmann’s Mayonnaise. So, profits at a local Sainsbury’s  were improved and suitcases were carefully packed with items to be delivered on Sunday to an address in San Diego County…

(how long before Christmas does it get installed?) and the air-side shops displayed some tempting wares. Images of London can be transferred onto any goods these days,

it seems. And does anyone else recall a childhood awareness of this very famous toy shop 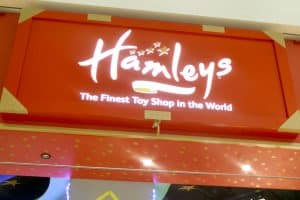 but never ever living near enough to visit it…?

The flight was heavily booked, stage 1 through Los Angeles, stage 2 on to Auckland, New Zealand.  Visibility on Saturday afternoon deteriorated in rain and heavy cloud,

but the moving map showed the aircraft’s route as it tracked northwards, 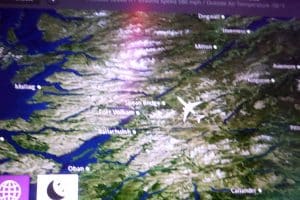 north and west across southern Iceland, 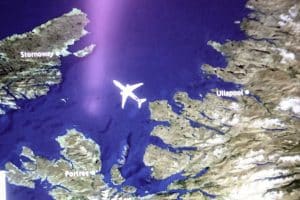 then the long route over Greenland to Canada, 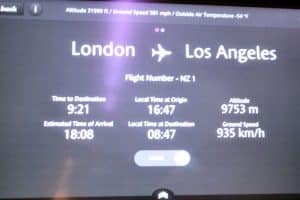 over Baffin Island and Hudson Bay, flogging onwards for hour after hour high above rugged terrain towards Edmonton.

Occasionally during the flight there were glimpses of what lay below: far north in Canada there was a totally white landscape, devoid of human interference. Then for a while the cloud layer below was still, totally still. 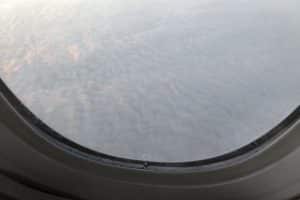 Furls of cloud were static, as if waves rolling to a distant shore were held in a long pause.

Still way north there was an in-cabin distraction. The entertainment screens blanked and a voice announced: “If there is a doctor on board please make yourself known to a flight attendant. A passenger is unwell.” On the far side of the cabin a small knot of folk had gathered. Was a doctor found? What was the cause? For a while the track of the plane seemed to veer away from its course on the inflight electronic map. 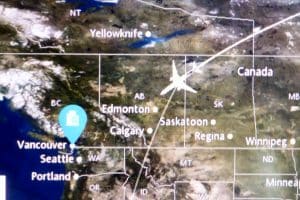 Was there to be an early landing in Vancouver? Or Seattle?

Gaps in the cloud high above Edmonton revealed geometric lots and straight roads. The plane flew on, white icing-topped Rockies below.

At 1610 (destination time), eight hours after take-off, the plane crossed “the lower 48th”, into US air space. 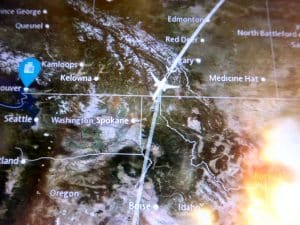 .    As the sun was setting in the west the sky became a vibrant swatch of layered colour – dark blue, deep turquoise, gold, orange. 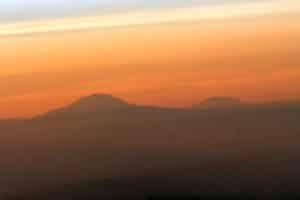 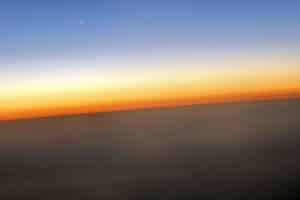 An hour before landing the aircraft crossed from above Nevada into California.

There was a steady descent, down over the Los Angeles Basin, down to come in from the west over the ocean, over Long Beach, over the city. 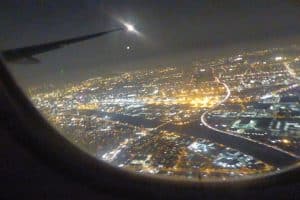 “It’s a bit smoky,” the Captain had announced, though from the starboard side there was no sighting of the devastating Malibu wildfires. 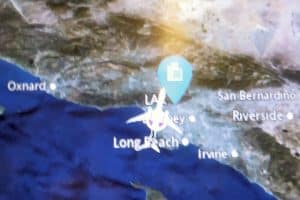 “Paramedics are waiting for the aircraft,” said the chief flight attendant. “Please remain seated until they have boarded and taken care of the passenger.” And no more was heard of that in-flight drama…

Arrival at LAX is an assault on the senses. Thousands of tired passengers get disgorged into a vast hall. Immigration staff direct folk to a line (US citizens or non-US travellers) and the great shuffle starts. 50 yards in one direction – turn – 50 yards back.

How many times did the line pass the mouth-masked Korean group snaking in the opposite direction?

Eventually the immigration machines were reached for passport scanning, fingerprint and facial feature scanning. When it’s 3am on the body clock, it takes considerable effort to follow barked instructions and unfamiliar procedures. When (eventually) the machine is satisfied it spits out a receipt which must be presented to an official (accessed of course via another queue) and finally, after baggage collection, to a Customs Officer. “Have your receipt ready, have your receipt ready, you cannot turn back,” were the words as the final (fast-moving) queue was reached.

There were two desks ahead, one was busy, the other free. The Captain lurched towards it.  “Sir, I did not tell you to step forward,” came the reprimand. Receipt finally surrendered and passport vigorously stamped, there was just the pull up the slope then to the street level.

“What is your idea of hell, Granny?” Cal Guy Jnr asked a couple of days later in a totally different context. Perhaps it is this, the long curve of the street outside the LAX arrival terminals. Traffic fumes hang heavy in the thick air. Eyes and chest are soon itching and wheezing. Buses, taxis, private cars screech forwards and weave through four lanes of traffic. Together the shrill whistles of the traffic police, the honking horns of the hotel shuttle buses and the hissing of pneumatic brakes combine into one unholy cacophony…

There was a shuttle minibus ride to a hotel and early the next morning to the car rental depot. It was Sunday, relatively quiet on the local roads.  There are pre-drive checks of course: photograph any scratches or blemishes on the external paintwork; check drive controls and switches; check water availability; plug in phone to set the satnav…

At the exit barrier from the car compound the paperwork was inspected – and a reminder chorused: “Keep to the right; drive on the right….”

Nerves of steel are required when first encountering American roads: direction signs are high up above traffic lights mounted on gantries above the carriageways, traffic under and overtakes on either side of a vehicle on multi-lane roads, the freeway south having eight lanes in either direction. There were fewer than normal heavy trucks but no shortage of fast moving cars. Deep concentration of course was required, along with a determination to avoid the toll road, payment for which seems harsh and complicated.

Forty minutes into the trip the Captain made an enquiry of his right hand seat passenger: “Is there any part of you yet unclenched?”

The freeway sweeps south, passing glitzy corporate buildings at Irvine. To the east rugged mountain ridges shimmered in the sunlight.

Further south came typical Californian traffic: a car, its back hatch open to allow space for the surfboards 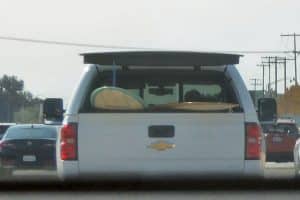 and several “snowbird” vehicles, huge RVs, homes on wheels for months on end for residents fleeing the northern cold to spend their winters south in the sun.

There is a point when the view seems reassuringly familiar: there’s a weigh station for heavy trucks, there’s Camp Pendleton, its training grounds either side of the freeway, there’s the now closed down nuclear power station and there’s the depot for the Amtrak and Coaster trains…

Oceanside: onto the eastbound Interstate 78 freeway, with about twelve miles to go. Almost on home territory.  Perhaps now Boatwif could unclench a few muscles?

Bang on midday the road transport arrived to deliver the goods: Smarties, Jaffa cakes, chocolate drops and Hellmann’s mayonnaise, about 5,700 miles by road and air…

As for the transport jocks – a couple of days later they were able to make the annual pilgrimage to Pannikin, 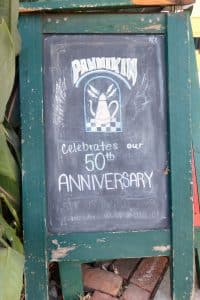 down on Highway 101, where the freshly ground coffee

Footnote: San Marcos is about 30 miles north of San Diego and the Mexican border, a long way south of the dreadful Camp, Hill and Woolsey fires. There is no complacency here though, and conversations with strangers in recent days have covered their experiences of the serious 2003, the 2007 and the 2015 wildfires in San Diego County. 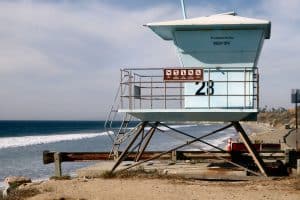