So there Cleddau was, at the bottom of Bosley Locks 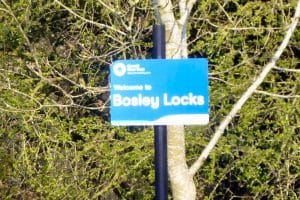 on a Tuesday morning.

A volunteer lock keeper was hovering at Lock 12, keen that no water should be moved since he had set locks 11 and 12 for a down-coming boat.

Then action – and all went well for quite a while. 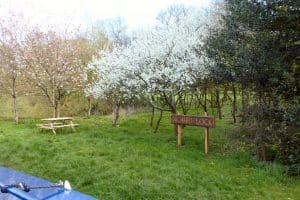 The lock keeper disappeared back up the hill, setting locks for this ascending boat. 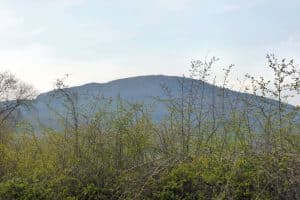 and lock 5 there was a lengthy delay. The road bridge inhibits the view; the gates ahead were closed, nothing moved. Cleddau stood off, treading water (treading shallows, more like). Finally there was movement and all manner of folk appeared: a mother, several young children, an adult with a pushchair and toddler, three chaps and finally a boat… A theory formed: the larger the crew, the longer the delay…

Onwards and upwards, the crew swapping steering and locking duties at regular intervals. It was when approaching lock 3 that Boatwif spotted the lock keeper again. He was crossing the narrow footbridge at the bottom of the lock, spikey things suspended from his hand. He spoke to the windlass-wielding Captain: “Watch out for this nasty hole here. I’ve put these weeds around it to mark it.” Once the boat was raised a closer look at the hole was possible: there it was, a deep, jagged, ankle-trapping cavity underneath the closed lock gate.

continuing upward to the top lock. There the lock keeper announced that he’d reported the void and he warned a boater about to start down the flight of its location. No surprise then a day later to receive this in the email inbox:

Our teams, whilst operating lock 3 today, have discovered a large void in the lock wall quadrant on the off-side.

Unfortunately, we have had to take the decision to close the Bosley Flight while our teams plan a temporary solution to allow passage.

We hope to provide you with an update by tomorrow afternoon.

Well, by Thursday a temporary cover had been placed on top of the hole while a permanent repair is planned. It just illustrates that there’s an unpredictability about this boating lark…

At the top of the Bosley Locks is a long line of moored boats. Among them were two Black Prince hire boats. A boat owner paused to chat, his conversation all about “the celebs”. There have been three entirely separate sources now for this celeb tale, so watch out. ITV crew, apparently, have been filming episodes of Celebs Go Boating (or some such title) on the Caldon Canal and also on the Macclesfield Canal. Two of the celebs are Michael Buerk and Sir John Prescott. Local gongoozlers have enjoyed watching the filming … If anyone spots a scheduling of these particular celeb shows please let the Cleddau crew know.

Onwards, passing painlessly through the Oakgrove electrically operated swing bridge. It’s not a fast operation: though there were no cars around at the start of proceedings, there were five by the time the bridge had been swung back into position.

What a change – the little cottage squashed between road and canal at Oakgrove has grown. For years this tiny place has remained empty and unloved. Now it’s sprouted a garden room on the back. 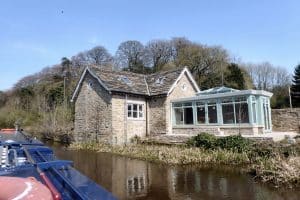 There’s another swing bridge a mile or so further on, a footbridge used by local walkers. It has a troubled history and is often left open to keep the navigation clear. “If that bridge is across,” Boatwif said to the Captain, half in jest, “you can do it…”  The bridge was across and it proved as difficult a beast as ever to shift. It requires a BWB key to turn a lock and then there is a heavy metal handle to lift before the bridge can be swung.

The lock seemed jammed. After a while the Captain returned to the boat to try a different BWB key. Still no success.

Off he went again, now armed with a spanner and a screwdriver. After some fiddling about the bridge deck slowly began to move. 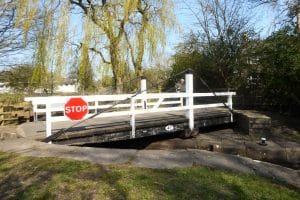 The boat was motored through, the bridge swung back. The Captain returned to the boat and began the laborious business of phoning Canal and River Trust to report the incident. (Meanwhile Boatwif, holding the boat on a centre rope, had a long conversation about rescue dalmatians with a passing walker…)

From then on the homeward cruise, though lacking in drama, continued to provide interest. There was a first experience at collecting an online order from an Amazon locker (in the Matalan fitting rooms at Lyme Green, who’d have thought…), the wooden building at Sutton Wharf seems to have been airlifted away, the new housing in Macclesfield at the old transport company site has come on apace 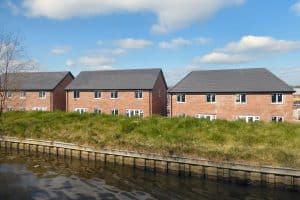 – and residents are now moving into the retirement apartments beyond Hovis Mill. 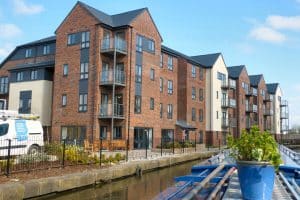 Having boated to Bedford for the River Festival last July, Cleddau had now become the mode of transport to a meeting of the Macclesfield Canal Society, 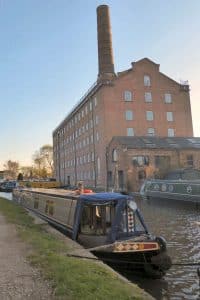 held on Thursday evening at The Silk Trader . There was an excellent presentation on the efforts to mark and restore the Uttoxeter Canal which leads from the Caldon Canal. Personal acquaintance with the Froghall end of the Caldon Canal and with the A50 Stoke – Derby dual carriageway aided visualisation of the various restoration projects…

Then on Friday (12th April ) Cleddau managed the last few miles of her 2018 Summer Cruise, out past Hurdsfield, past the severely cropped offside bank beside the AstraZeneca plant ,

through Kerridge and Bollington. 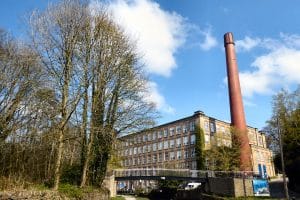 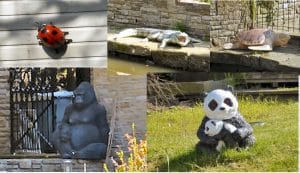 Finally there was a pause at The Trading Post for fuel (the Captain’s face recognised, though the boat’s colour change caused a bewildered look). 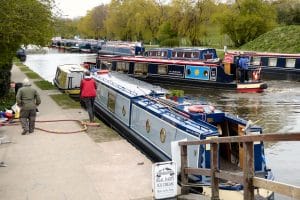 It had been 553 days since Cleddau left here for the repaint job at Aqueduct Marina,  and 368 days since leaving Aqueduct Marina last April to head for Bedford…There was a cheery wave from the moorings’ owner, a welcome back greeting from another moorer. 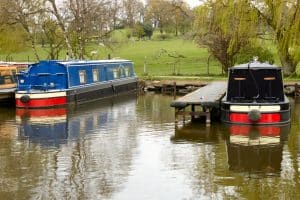